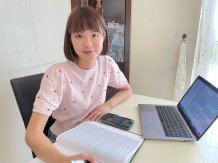 Mei Ting has received a grant of £35,000 to investigate the impact of various aerosols on the climate of exoplanets.

University of Exeter astrophysics student Mei Ting Mak has been awarded one of this year’s prestigious grants from the Bell Burnell Graduate Scholarship Fund.

PhD student Mei Ting has received a grant of £35,000 to investigate the impact of various aerosols on the climate of exoplanets.

Exoplanets are now known to be ubiquitous. Amongst the thousands already detected, many candidates with potentially Earth-like or habitable conditions have been identified.

However, planetary climates can be drastically altered by the presence of non-gas phase species or aerosols in the atmosphere, such as condensate clouds, photochemically produced hazes or mineral dust. – which can play major role in controlling the planetary climate.

For the project, Mei Ting will build on modelling already carried out by the Exeter Exoplanet Theory Group using the Met Office’s Unified Model (UM), to perform a detailed investigation of the impact of various aerosols on the climate, and simulated spectra of terrestrial exoplanet targets.

Mei Ting said: “I’ve always liked to imagine what the weather is like on other planets and modelling their climate makes me feel like I am staring straight into their atmosphere. Learning that aerosols play such an important role in climate modelling, I would like to study them in detail and hopefully provide a more quantitative model to interpret the existing and future data.”

The innovative Bell Burnell Graduate Scholarship Fund was set up by Professor Dame Jocelyn Bell Burnell and the Institute of Physics (IOP), the UK and Ireland’s professional body for physicists.

Dame Jocelyn, a former president of the IOP, was awarded the 2019 Special Breakthrough Prize in Fundamental Physics for her role in the discovery of pulsars, and for her continued scientific leadership and engagement with the scientific and wider communities.

The Bell Burnell Graduate Scholarship Fund that resulted is an innovative doctoral scholarships fund that aims to encourage diversity in physics by assisting students from groups under-represented in the physics research community to undertake physics PhD programmes.

Students encouraged to apply include women, people with refugee status, and ethnic minority, disabled, financially disadvantaged and other students who would otherwise struggle to complete a course of postgraduate study due to their circumstances.

Rachel Youngman, Deputy Chief Executive of the Institute of Physics, said:  “To be able to hear what it means to the lives and futures of those who have and are now receiving scholarships is heartening for all of us who are committed to improving diversity in physics.

“We know that diversity means better research, and together with our continued commitment to support the physics community in being an inclusive environment within which everyone can thrive, we will see significant changes. Dame Jocelyn’s generosity has made this possible and we remain incredibly proud that we are able to run this scheme and be part of seeing greater diversity of those able to go on to study for their PhDs.”