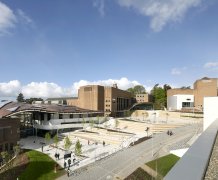 Leading academics from Exeter have been recognised as being amongst the world’s most influential researchers, according to a prestigious new ranking.

Exeter experts among world’s most influential scientists, according to new ranking

Leading academics from the University of Exeter have been recognised as being amongst the world’s most influential researchers, according to a prestigious new ranking.

Fourteen scientists from Exeter, and a further two who are affiliated to the University, feature in an authoritative new list of the most highly cited researchers worldwide, produced by Clarivate Analytics.

Now in its fifth year, the ranking identifies researchers who have published a “notable” number of highly cited papers across 21 fields in Clarivate’s Web of Science database, over the period 2006-2016.

To qualify, the papers must rank in the top one per cent of the most cited works in their field. This year, the rankings have also included a new ‘Cross-field” category to recognise researchers with substantial influence across several fields.

Exeter’s cohort, which has increased from last year, includes some of world’s leading experts on the environment, microplastics pollution and genetics.

They include Professor Peter Cox, Professor Pierre Friedlingstein, Professor Adam Scaife and Dr Chris Huntingford - all from Mathematics – and Professor Stephen Sitch from Geography who feature in the Geosciences category.

Professor Tamara Galloway, one of the world’s foremost experts on plastics pollution and who won a Guardian award earlier this year for her policy-changing research, Professor Kevin Gaston of the Environment and Sustainability Institute on the Penryn Campus, and Professor Friedlingstein again, are all included in the Environment/Ecology category of the report.

From the Medical School, Professor Andrew Hattersley FRS, Professor Tim Frayling, and Dr Michael Weedon  who are involved in research to combat some of the most challenging healthcare issues such as diabetes and obesity, were named in the Molecular Biology and Genetics category.

Professor Peter Stott (Mathematics) and Professor Richard Betts (Geography) are also included in the rankings, but under their affiliation with the Met Office.

Professor Neil Gow, Deputy Vice-Chancellor (Research and Impact), said: “We are extremely proud to have so many academics recognised in this global list of influential researchers.

“The Highly Cited Researchers 2018 shows the impact of our research community here at Exeter and is testament to the world-leading research academics are undertaking in their fields, spanning ecology, climate science, genetics and psychology.”

Annette Thomas, CEO of the Scientific & Academic Research group at Clarivate Analytics, said: "The Highly Cited Researchers 2018 list helps to identify the researchers who are having the greatest impact on the research community as measured by the rate at which their work is being cited by others and that contributes so greatly to extending the frontier and gaining knowledge and innovations for society - contributions that make the world healthier, safer, richer, and more sustainable."