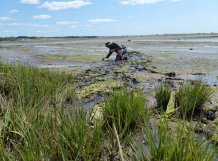 Mud provides precious habitats, a buffer against rising sea levels and a host of other benefits, according to two University of Exeter researchers.

Dr Barnett told the programme mud accumulates as sea levels rise, providing a record of sea-level changes – and even protecting land against the rising seas.

“We can determine that the rate of sea-level rise that’s going on over the past 100 or 200 years is unprecedented,” he said.

He said salt marshes in coastal areas provide a “fantastic” natural buffer against rising seas because they accumulate so much sediment that they can rise by more than a centimetre a year.

Dr Baker, of Exeter’s Centre for Water Systems, said mud can be a “really important habitat” for creatures that live on the riverbed, such as mayflies and dragonflies.

“If you look at rivers you will often see sediment bars and muddy bits at the edges, and all of that sediment is constantly being moved around, it’s evolving and changing depending on the energy levels of the river,” she added.

“You can just look at the colour of the river and that almost tells you how much energy it’s got.

“If it’s fast flowing it’s got enough energy to pick up that suspended sediment, so all you see is that murky, muddy water flowing down, but if you go back to that same river or stream another time when it’s been dry for a few weeks or a few days then you can see right to the bottom.

“That’s why I think rivers are so magical – because they change all the time.”

In Love with Mud: A Poetic Exploration of Mud was broadcast on Radio 4 on Sunday (1 April) and will be broadcast again on Saturday (7 April) at 11.30pm (BST).