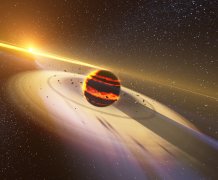 Image of a hot Jupiter seen as part of the new VR documentary.
Credit: Engine House Vfx / University of Exeter / We The Curious

Budding astronomers and space enthusiasts are set to be given the chance to explore exotic worlds orbiting distant stars, thanks to a pioneering new virtual reality documentary.

World-leading astrophysicists from the University of Exeter have teamed up with ‘We The Curious’ in Bristol, and visual effects artists from Cornwall-based animation studio Engine House, to create a scientifically informed, virtual reality tour of six exoplanets.

The team have created a detailed 360° visual display to teleport viewers from Earth to these distinctive worlds, to see first-hand how they differ from our own planet. The researchers also provide a commentary to guide virtual space travellers through the experience as they visit each planet.

The video transports viewers to a range of exotic planets beyond our solar system. These planets include: Wasp - 121b, a planet so close to its star that its atmosphere is being driven off; Kepler-62e, a planet which is potentially entirely covered by a deep ocean, and ravaged by monster waves, and 55 Cancri e, a hellish planet likely to be covered in vast lava flows and constantly engulfed in huge lightning storms!

The virtual planet tour is available on youtube here.

“I wanted to create something I’d never seen before.” said Ross Exton, video producer for We The Curious. “By collaborating with talented visual effects artists and astrophysicists currently studying these exoplanets, we were able to create a series of visuals which are not only stunning, but are informed by real scientific research.”

Nathan Mayne, University of Exeter and scientific lead on the project added: "Our research, here at the University of Exeter, combines data from cutting-edge facilities with state-of-the-art theoretical models to provide us with a glimpse into the conditions found on distant, exotic worlds.

“Working with the Met Office has enabled us to benefit from decades of work understanding Earth's own climate, and adapt this to distant worlds. Now, collaborating with visualisation and science communication experts has enabled us to share what a trip to one of these amazing environments might be like.”