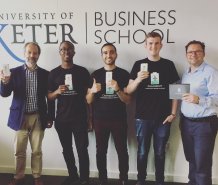 An eco-friendly phone charging network is being launched by three engineering students from the University of Exeter.

The ambitious trio – Hugo Tilmouth, Hakeem Buge and Chris Aoun – have set up a business which will hire out battery packs to charge phones.

They aim to set up an extensive network so the batteries – all charged using power bought from green energy suppliers – can be picked up and dropped off at a vast range of locations including coffee shops and train stations.

The entrepreneurs, whose company is called Innovate Energy, are all masters students in Renewable Energy Engineering at the University of Exeter’s Penryn Campus in Cornwall.

The students were successful in receiving an initial award of £1,400 from Exeter’s Think:Try:Do Student Startup Support Programme. This award will enable the team to conduct vital market research and testing.

"The research activity and the knowledge it’s providing of their clients and the marketplace will enable the team to correctly position the company.

"It is fantastic to see Exeter students applying such energy and dedication as well as good business practice to grow their startup.”

Innovate Energy will be hiring out batteries at the Royal Cornwall Show on June 8, 9 and 10 free of charge (with a £10 deposit) to show people how they work.

“We want to be everywhere – the aim is to create worldwide, sustainable charging network,” said Hugo, 21.

“We want customers to be able to pick up and drop off our battery packs at cafes, hotels, train stations and lots of other places in the UK and around the world.

“The Royal Cornwall Show will be our first public trial, but we’re already planning to set up shop at festivals this summer.”

The battery packs, which have a variety of adaptors to fit almost all phones, can charge two phones at once and have enough power to charge three phones from 0-100%.

“The problem of having phone batteries die is something people experience all the time,” said Hakeem, 22.

“We decided to provide a solution to that problem, using what we have learned at university.

“We have all nearly finished our courses, so we will be pushing this hard over the next few months in the hope that this can be our job after university.”

A portion of the profits from Innovate Energy will be donated to energy charities in Africa – but the entrepreneurs don’t expect their venture to succeed based on green and charitable credentials alone.

“Even if people aren’t interested in the green energy side of this, we want our prices to be cheap enough that everyone can use the battery packs,” said Chris, also 22.

“However, for those people who are interested in sustainability, we guarantee that 100% of the energy used in charging the batteries comes from renewable sources.”