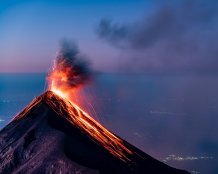 Scientists have uncovered a fascinating new insight into what caused one of the most rapid and dramatic instances of climate change in the history of the Earth.

A team of researchers, led by Dr Sev Kender from the University of Exeter, have made a pivotal breakthrough in the cause behind the Paleocene-Eocene Thermal Maximum (PETM) – an extreme global warming event that lasted for around 150 thousand years which saw significant temperature rises.

Although previous studies have suggested volcanic activity contributed to the vast CO2 emissions that drove the rapid climate change, the trigger for event is less clear.

In the new study, the researchers have identified elevated levels of mercury just before and at the outset of the PETM – which could be caused by expansive volcanic activity – in samples taken from sedimentary cores in the North Sea.

Crucially, the research of the rock samples also showed that in the early stages of the PETM, there was a significant drop in mercury levels – suggested at least one other carbon reservoir released significant greenhouse gases as the phenomenon took hold.

The research indicates the existence of tipping points in the Earth’s System - which could trigger the release of additional carbon reservoirs that drove the Earth’s climate to unprecedented high temperatures.

The pioneering research, which also includes experts from the British Geological Survey, the University of Oxford, Herriot-Watt University and the University of California at Riverside, could give a fresh understanding of how modern day climate change will affect the Earth in the centuries to come.

The research is published in Nature Communications on August 31th 2021.

Dr Kender, a co-author on the study from the Camborne School of Mines, based at the University of Exeter’s Penryn Campus in Cornwall said: ”Greenhouse gasses such a CO2 methane were released to the atmosphere at the start of the PETM in just a few thousand years.

"We wanted to test the hypothesis that this unprecedented greenhouse gas release was triggered by large volcanic eruptions. As volcanoes also release large quantities of mercury, we measured the mercury and carbon in the sediment cores to detect any ancient volcanism.

"The surprise was that we didn’t find a simple relationship of increased volcanism during the greenhouse gas release. We found volcanism occurred only at the beginning phase, and so another source of greenhouse gasses must have been released after the volcanism.”

The PETM phenomenon, which is one of the most rapid periods of warming in the Earth’s history, occurred as Greenland pulled away from Europe.

While the reasons behind how such vast quantities of CO2 were released to trigger this extensive period of warming lay hidden for many years, scientists have recently suggested that volcanic eruptions were the main driver.

However, while carbon records and modelling have suggested vast amounts of volcanic carbon was released, it has not been possible to identify the trigger point for PETM – until now.

These samples showed numerous peaks in mercury levels both before, and at the outset of the PETM period – suggesting it was triggered by volcanic activity.

However, the study also showed that there was at least one other carbon reservoir that was subsequently released as the PETM took hold, as mercury levels appear to decline in the second part of its onset.

Dr Kender added: “We were able to carry out this research as we have been working on exceptionally well preserved new core material with collaborators from the Geological Survey of Denmark and Greenland. The excellent preservation allowed detailed detection of both the carbon released to the atmosphere and the mercury. As the North Sea is close to the region of volcanism thought to have triggered the PETM, these cores were in an ideal position to detect the signals.

"The volcanism that caused the warming was probably vast deep intruded sills producing thousands of hydrothermal vents on a scale far beyond anything seen today. Possible secondary sources of greenhouse gases were melting permafrost and sea floor methane hydrates, as a result of the initial volcanic warming.”