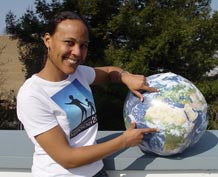 From Exeter to Benin – physics communicator takes the prize

A University of Exeter astrophysicist and a Cardiff-based Research Engineer for EADS have won the Institute of Physics’ (IOP) inaugural Early Career Communicators’ Award for the inspirational activities they have undertaken to introduce a diverse range of people to the wonders of physics.

At the prize-giving event on Tuesday 8 November - which was conducted to give four shortlisted candidates the opportunity to display their communication success to a panel of experienced communicators - Dr Aude Alapini Odunlade, an Associate Research Fellow in Astrophysics at the University of Exeter, explained how she has worked in Europe, Africa and Asia to inspire and excite.

Her presentation to the assembled crowd and judges focused on work that Aude has undertaken in the country she grew up in, Benin in West Africa.

Following initial success in 2006, explaining a solar eclipse to hundreds of children and adults, Aude took a show on a national tour to six Beninese cities throughout the International Year of Astronomy 2009, and is now working towards the establishment of a Science and Communication Centre in Benin.

Her fellow-winner, Rhys Phillips, a maths and physics graduate who now works at EADS Innovation Works UK in the Lightning, Electrostatics and EMH (electromagnetic hazards) group, presented an incredible range of communication activities.

From the construction of a Lego based science club workshop, initially developed for one science club but now being rolled out across Wales, reaching at least 3,000 children each year, to a range of shows on Radio Cardiff, a community-based radio channel, including the Monday breakfast show and a weekly half-hour science show called Pythagoras’ Trousers.

With remarkable tenacity and an already full schedule, Rhys is now working on the roll-out of a ‘science cabaret’ show to help introduce physics in a fun context to new audiences. He recently made his debut stand-up comedy performance at Bright Club Wales and is working with friends towards the establishment of an annual Cardiff Science Festival.

The judging panel – which comprised of Guardian science correspondent Alok Jha, the Metro’s Metrocosm editor Ben Gilliland and Professor of Science Communications at the University of Reading Averil MacDonald – was impressed by all four shortlisted candidates but felt the high impact and legacy of Aude’s activities, and the incredible range of Rhys’ undertakings, gave them the edge.

Dr Aude Alapini Odunlade of the University of Exeter's Astrophysics Group said, “Winning the Very Early Career Physics Communicator Award is like an exceptional cherry on an amazing cake! The cherry is the award, with the recognition of my work in physics communication. The cake is the contacts and network that I have met at the award meeting, which will help me take my communication activities forward.

“The other finalists all had impressive projects and ideas. Having been selected as one of two winners, out of the 26 high profile applications, means that I am definitely doing something right. This is a breath of renewed energy and conviction that will help me carry on my communication projects, impacting and enthusing children and adults alike with physics, science and technology for years to come. Thank you!”

Rhys said, “None of the finalists here today are doing these activities because they want the recognition – it’s the rewarding feeling you get when a child tells you that because of your talk they want to be a scientist, and the enjoyment of interacting with a variety of people.

“However, it is great to have this voluntary work recognised by the Institute of Physics and I’m honoured to have jointly won the first of these awards. I hope I can work with all three of the other finalists in the near future and Aude and I are already in discussions regarding a joint science communication project to do together.”

On the importance of science communication, Alok Jha, who gave a keynote speech before the finalists’ presentations, said, “"Science is at the heart of many of the most important issues we face as a society: climate change, public health, nuclear power, education.

“Every day, the government, businesses and law courts make decisions that will affect us all, and they all say they do it based on evidence. Science communicators can analyse and shed light on these institutions and ideas. And a good coverage of science creates exactly the kind of interested and engaged citizens that are integral to properly-functioning democracy."