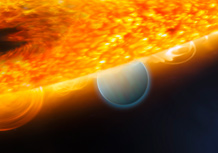 An artist's impression of the Jupiter-size extrasolar planet, HD 189733b, being eclipsed by its parent star. ESA, NASA, M. Kornmesser (ESAHubble) and STScI.

An international team of scientists led by the University of Exeter is aiming to answer some of the biggest questions facing astronomy today.

The team has secured a large programme of nearly 200 hours on NASA’s Hubble Space Telescope to explore the atmospheric conditions of planets outside our solar system, known as exoplanets.

Large programmes on the Hubble Space Telescope have historically led to data sets with a lasting legacy.

The research will focus on ‘Hot Jupiters,’ which are exoplanets that are similar in size to Jupiter, but with temperatures of 1,000 degrees or more because they orbit so closely to their respective stars. Data gathered using the Hubble Space Telescope will tell us more than ever before about the atmospheric composition of these planets outside our solar system.

By understanding the chemical make-up of exoplanet atmospheres around eight ‘hot Jupiters’ and perfecting the difficult techniques needed to make these precise measurements, the researchers will also help prepare for future searches for life on exoplanets.

“Astronomers have now detected hundreds of exoplanets and we now know that some of these planets have extreme environments, unlike anything in our own solar system. Everything we have discovered so far about these planets has been puzzling so I am expecting the unexpected.”

The team aims to use the Hubble Space Telescope to detect and understand a mysterious gas in the stratospheres around these planets, causing a similar effect to the ozone layer on Earth. This gas is detectable as it absorbs light from the parent star when the planet passes in front of the star. In August 2010, two teams – one at the University of Exeter and the other in Florida – developed a new technique, which led to the detection of potassium around a ‘Hot Jupiter’, giving us the first clues as to why some of these planets appear as black as charcoal in visible light.

The University of Exeter has one of the UK’s largest astrophysics groups working in the fields of star formation and exoplanet research. The group focuses on some of the most fundamental problems in modern astronomy – when do stars and planets form and how does it happen? They conduct observations with the world’s leading telescopes and carry out numerical simulations to study young stars, their planet-forming discs, and exoplanets. This research helps to put our Sun and the solar system into context and understand the variety of stars and planetary systems that exist in our Galaxy. Through its science strategy, the University is seeking to invest £230 million of internal and external income in five key themes of activity, one of which is Extrasolar Planets.