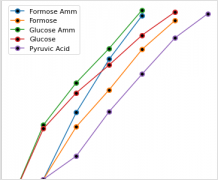 'Plot of the number of matches with the library of molecular alternatives to RNA/DNA for all 5 networks considered as each network is built up.

This summer, Matthew Ludwig, a second year Natural Sciences student, participated in the Young Scientist Program (YSP) with the Blue Marble Space Institute of Science (BMSIS) based in Washington.

This summer, Matthew Ludwig, a second year Natural Sciences student, participated in the Young Scientist Program (YSP) with the Blue Marble Space Institute of Science (BMSIS) based in Washington.

The YSP runs every year and partners students and graduates with scientists affiliated with organisation to work on a research project. The YSP not only involves working on this research project, but also includes an ethics course and a science communication project. As a part of the YSP, Matthew created a poster which he then presented at a conference, as well as writing an article for Sciworthy.

His research project was in the field of astrobiology, focused on what molecules could have existed on the earth’s surface four billion years ago shortly after the earth was formed. The way that information is stored in life is primarily DNA; DNA is an example of a type of molecule called a polymer, which is a chain of building blocks. There are two molecules which commonly store information, DNA and RNA. For a long time, scientists have thought that the first organisms on earth four billion years ago were RNA based. A problem with this hypothesis is that RNA is difficult to make chemically without applying very specific, controlled conditions, so the likelihood of RNA molecules forming by themselves on the Earth’s surface is improbable. One hypothesis is that there may be similar, simpler building blocks that were more likely to have come about on the Earth’s surface four billion years ago.

There are computational methods that simulate a chemical string. You can program a computer to simulate how molecules will react together, which eventually builds a network of molecules related by how they react together. In doing so, you can simulate what molecules were likely formed by chemical reactions on the Earth’s surface from molecules plausibly available at the time.

This builds up two sets of data; the molecules that will have likely formed on the Earth’s surface and the list of molecules that could feasibly replace RNA or DNA as the first systems that could store information. Matthew’s task was to look at the intersection between the two; what molecules could have formed on the Earth’s surface four billion years ago, and which of the molecules is a plausible alternative for the basis of systems that can store information in the same way of RNA and DNA?

Matthew discovered a significant number of such molecules does exist. He then extended the scope of his research by investigating the properties of these molecules and identifying pathways for their formation in the aforementioned chemical networks.

Matthew had the opportunity to speak at an internal BMSIS conference and an external conference, well as presenting a poster at The Molecular Origins of Life which is a prestigious conference with leaders of the field of life research in attendance.

Matthew said “the internship, was a really good chance to gain more experience of what research science is like. It was a good experience being given problems to solve that were open ended and not having too much guidance. I had a supervisor and principal investigator and I had regular contact with both, but a lot of it was being given parts of a problem, going off and solving it, and it was nice having open ended work like that. It was also good to have a chance to practise science communication, and I got a lot of tips and guidance from my supervisor about how to engage the audience, and how to make eye catching slides and conducive figures.”