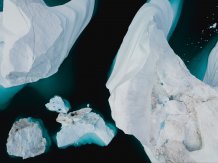 The Arctic region has warmed at least twice as much as the global average, leading to a number of serious environmental consequences.

A set of scientific reviews published today reinforces the urgent need for global action to reduce the impact of climate change on vital carbon sinks, our oceans and the Arctic.

Conducted by international teams of scientists, these new reviews are part of a collection on ‘Critical Issues in Climate Change Science’ relevant to the negotiations due to take place at the COP26 climate conference, which starts on Sunday in Glasgow.

The reviews were carried out using ScienceBrief, an online platform set up by the University of East Anglia (UEA) and the Tyndall Centre for Climate Change Research to share scientific insights and make sense of peer-reviewed publications in a rapid and transparent way.

They draw on findings from more than 430 scientific articles published over the last eight years, since publication of the previous IPCC Assessment Report.

Adam Smith, of the Tyndall Centre for Climate Change Research and School of Environmental Sciences at UEA, coordinated the reviews. He said: “All three reviews show that the impact of climate change on these important areas is growing with the level of climate change, and that substantial impacts can be avoided by rapidly and substantially decreasing global emissions.

“The Arctic region, for example, is experiencing rapid warming and other changes including increased extreme weather such as heatwaves and wildfires, leading to changes in Arctic landscapes and ecosystems, such as permafrost thaw and shrinking sea ice. These changes have profound impacts on the way the Earth operates.”

The ScienceBrief Review on Arctic warming examines the evidence linking warming to the amplification of climate change impacts in Arctic, boreal and mid-latitude regions. The Arctic region has warmed at least twice as much as the global average, leading to a number of serious environmental consequences.

The extent and thickness of sea-ice have decreased, and rates of permafrost thaw have increased in recent decades. The impacts of rising mean annual temperatures have been exacerbated by an increase in heatwaves this century.

Co-author Dr Judah Cohen, from Atmospheric and Environmental Research in the US, said: “Nowhere has climate change been more impactful and dramatic as in the Arctic. A region long associated exclusively with ice is increasingly becoming a region of fire and ice with large wildfires especially in Siberia making headlines.

“The Arctic has also been considered a remote region with little influence on the weather of the industrialized countries. However, observational analysis of the large changes in the Arctic, especially sea ice loss and weather extremes, suggests that the two may be related.

“As the review succinctly summarizes though, this is a complex hypothesis with mixed signals in both the observations and the models and much more analysis is needed before consensus can be achieved.”

The ScienceBrief Review on carbon sinks, such as oceans and forests, explores how climate change modifies the rate at which different sources and sinks of carbon operate, which varies the rate of growth or decline of atmospheric carbon dioxide (CO2) concentration, amplifying or dampening climate change respectively, known as ‘feedback’.

The size of the carbon–climate feedback is constrained by observations of the past and by models. Reduced land and ocean carbon storage in response to climate change is estimated to result in an additional warming of up to 30%.

“We now have much evidence pointing in the direction of a positive feedback between climate change and the global carbon cycle,” said lead author Prof Pierre Friedlingstein, of the Global Systems Institute at the University of Exeter.

“Warming leads to a reduction of both the land and ocean carbon sinks, leaving a larger fraction of the anthropogenic emissions in the atmosphere, hence amplifying the warming. Only rapid and strong emissions reduction will help mitigate those positive feedbacks.”

The ScienceBrief Review on marine heatwaves finds that climate change has contributed to observed increases in the frequency, intensity and duration of recent heatwave events in all oceans. Collapse of kelp forests on three continents and coral bleaching of the Great Barrier Reef and other locations are just some of the impacts of marine heatwaves.

Marine heatwaves are often defined as unusual warm water events of five days or more in duration and can be caused by a range of natural physical processes driven by oceanic and atmospheric conditions.

Prof Thomas Wernbergof the University of Western Australia, who led this review, said the evidence shows clear consensus that ocean warming due to human-caused climate change is increasing the probability of these processes combining to produce more frequent and intense heatwaves.

“These changes cause widespread ecological and socioeconomic impacts, in all oceans and on a range of species throughout entire ecosystems,” said Prof Wernberg. “For example, changes to distribution of marine species, loss of biodiversity, and the collapse of foundation species including coral, kelp and seagrass.

“Also, declines in the services these ecosystems support, such as fisheries revenues and livelihoods, as well as cultural and recreational assets.”

Future marine heatwaves are projected to become more frequent, intense and longer by the mid-21st century under all future emissions scenarios - including those aligned with the Paris Agreement - highlighting impacts of historic emissions that are already ‘locked-in’.

These latest reviews complete a collection that also examines the role of climate change in recent wildfires, tropical cyclones, and extreme rainfall and floods, as well as the role of independent advisory bodies to facilitate ambitious national responses to climate change.