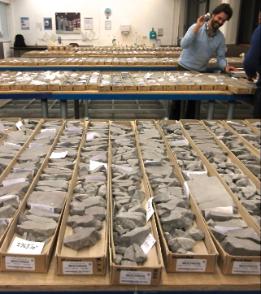 JET is a large-scale, multi-faceted, international programme of research on the functioning of the Earth system at a key juncture in its history – the Early Jurassic. At that time the planet was subject to distinctive tectonic, magmatic, and orbital forcing, and fundamental aspects of the modern biosphere were becoming established in the aftermath of the end-Permian and end-Triassic mass extinctions.

This project is funded by the International Continental Scientific Drilling Programme (ICDP) and the UK Natural Environment Research Council (NERC), and is centred on study of a 2-km-deep borehole at Mochras, North Wales. Here the drillcore represents 27 million years of Early Jurassic time with sedimentation rate of approximately 5 cm/kyr.

We aim to use this unique record together with existing data and an integrative modelling approach to produce a step-change in understanding of Early Jurassic Earth system dynamics. The project team comprises ~50 scientists from 14 countries.

The Early Jurassic (201–174 million years ago) was a pivotal time in the evolution of the modern Earth, when it was subject to breakup of the supercontinent Pangaea, initiation of the Atlantic and other new ocean basins, and the gradual evolution of the modern biota. Breakup of Pangaea was accompanied by tectonic, magmatic and biogeochemical disturbances including the largest magnitude perturbation of the carbon-cycle in the last 200 Myr, coeval with the Toarcian Oceanic Anoxic Event (T-OAE) (Jenkyns, 2010, Hesselbo et al., 2013).

Continued environmental change played a role in the recovery from the end-Triassic mass extinction, in the rise of modern phytoplankton (Falkowski et al., 2004; van de Schootbrugge et al., 2013), in preventing recovery of the marine fauna, and catalysing the so-called Mesozoic Marine Revolution (Vermeij, 1977; Bush and Bambach, 2011). Existing knowledge, however, is based on scattered and discontinuous stratigraphic datasets, meaning that stratigraphic correlation errors (i.e. mismatch between datasets from different locations) confound attempts to infer temporal trends and causal relationships, leaving us without a quantitative process-based understanding of Early Jurassic Earth system dynamics.