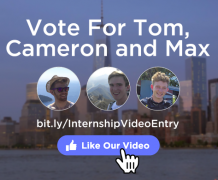 The video with the most 'likes' will win fully sponsored internships.

A team of students from the University of Exeter have reached the final knock-out round of an esteemed international competition, designed to help boost their career potential.

Cameron Ballard and Max Beech are part of a team who have made it through to the final showdown in the celebrated City Internships competition – which sees the winning entry being given a fully-sponsored internship next summer.

They are a part of one of two teams to have made it through to the latter stages of the competition, which saw them produce a 60 second video describing why they should win the internship – and are now facing a public online vote to decide who will be the overall winners.

The team’s video, which outlines why they would be the ideal candidates for the internship roles, as well as what makes the University of Exeter a world-leading institution - is available to view online, with the winners chosen by the number of ‘likes’ reached by Friday 16th December.

If the video reaches 4000 ‘likes’, the students will automatically be offered the internship on a programme of their choosing.

Cameron Ballard, a 2nd year BSc Geography student said: “To be able to take this internship would be a dream come true. We really need your help if we are going to win the competition, so please like our video!”

City Internships are offering three fully-sponsored placements in cities across the US, including Washington DC, New York and San Francisco, along with opportunities in Paris, Hong Kong, Sydney and London.

Candidates can choose from a wide variety of industries, with Cameron, Max and fellow teammate Tom Phipps of the University of Southampton, aiming to secure a space on the Technology and Engineering programme in the US.

Max Beech, a 2nd year BSc Computer Science student said: “This is an incredible opportunity to learn a lot and network with some of the top employers in our field. Not only that, we will be able to explore one of the greatest cities on earth.”

In 2013 the trio travelled to Cambodia to teach a range of fundamental life skills with lessons covering logic, art, music and sport. A year later they created a multi award winning clothing company, Allumez, which went on to be the highest earning student company in Surrey. Since attending university, they have won funding to create an app and have taught more than 200 fellow students how to code.

Click the link to see the video produced by Cameron, Max and Tom. The winner will be announced on Monday 9th January.