Planet formation involves the dynamic interplay between ice, dust, and gas in protoplanetary discs. The eventual goal of protoplanetary disc research is to produce a predictive theory that can explain the observed demographics of exoplanets, but the relative importance of different processes such as dust trapping, core accretion, gravitational instability, and planetary migration is still unclear.

Fortunately, modern high-angular resolution techniques have opened up powerful new ways to investigate protoplanetary discs during the epoch of planet formation. During this PhD project you would analyse and model data obtained with the Gemini Planet Imager, an extreme adaptive optics (AO) instrument that corrects for Earth’s turbulent atmosphere to produce diffraction-limited images using the 8-m diameter Gemini South Telescope.

These data were obtained as part of our GPI Large and Long Programme entitled Scattered Light imaging of YSOs: Probing the Fundamental Stages of Planet Formation (see Figure 1). The observations show large-scale structures in the discs that may the result of dust trapping, snow lines, or the influence of external or internal stellar or planetary mass objects (see for example Monnier, Harries et al. 2017, 2019; Laws, Harries et al. 2020). 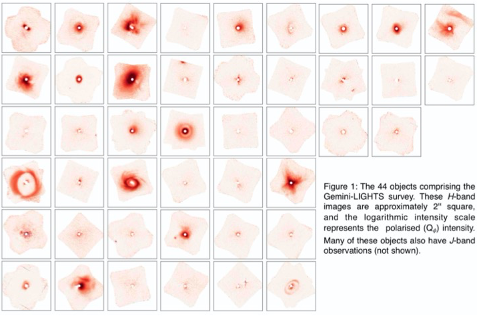 The first stage will be a detailed quantitative analysis of the structures observed in the scattered light images. The second is to combine these data with other probes of the disc, including the spectral energy distribution, and high-resolution imaging at other wavelengths, including ALMA and SMA sub-mm data and optical/near-IR interferometry. The ultimate goal is to model the dataset using a state-of-the-art radiative-transfer code, TORUS, which has been developed here at Exeter (reviewed in Harries et al. 2019). The code is capable of modelling both the dust continuum and spectral lines (see Figure 2 for example), which enables the extraction of the maximum information from the pan-spectral data. 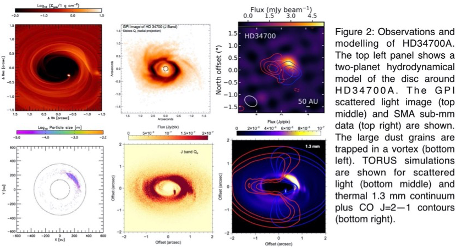 This PhD project would be suitable for a candidate that is interested in both observations and theory. It will require you to gain familiarity with a variety of observational data, including AO high-contrast imaging, sub-mm continuum and molecular line data, and near-IR interferometry. In addition you will become adept at running, and fitting, numerical models to the data in order to extract information on the disc thermal conditions, the dust properties, and the disc dynamics and chemistry. Ultimately you will produce new insights into the structure and evolution of planet-forming discs.