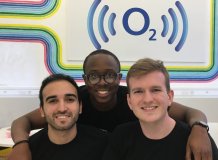 A trio of graduates have won backing from mobile phone giant O2 for their eco-friendly phone charging network.

Their first project is ChargedUp, a network of vending machines where people can rent out batteries – all powered using renewable energy – to charge their phones before returning them to any ChargedUp station at their convenience.

Efforts to establish the network have been boosted by funding worth up to £10,000 from O2’s Think Big initiative, as well as mentoring from O2 experts.

“It’s massive for us to get this funding and support from O2,” said Hugo.

“It’s certainly a boost, but there’s still a long journey ahead and a lot of work to do.

“We’re working on a range of things at the moment, from developing our app to perfecting the design of our batteries and improving the database that will keep track of batteries that have been rented out.”

Hugo, Hakeem and Chris, who studied at Exeter’s Penryn Campus in Cornwall and graduated in the summer, also hope to raise £10,000 through a month-long Kickstarter campaign due to start towards the end of January.

If this campaign is successful, the team will use the money to create a mould to make a large number of batteries, cutting the cost of each one.

The team have also got their first office, a shared space at Central Research Laboratory – a “startup accelerator” in west London.

Innovate Energy’s early progress was supported by two grants – for £1,400 and £2,600 – from the Think:Try:Do Student Startup Support Programme at the University of Exeter.

They first rented out their batteries at the Royal Cornwall Show in June, and they have now created their first automated machine to distribute them.

This is still in their office, but they hope to “release it into the wild” as one of about 50 machines in public spaces across London from April.

“We hope to expand from that as quickly as possible,” Hugo added.