Figure 1. A surface plasmon: an electromagnetic wave bound to a charge oscillation at an interface of a conductor. Dotted lines represent the electric field, joining regions of high (red) and low (blue) charge density. 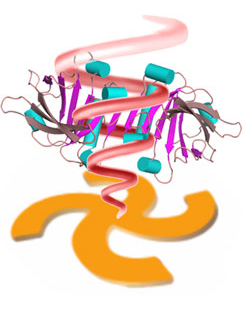 We utilize metallic nanoparticles with twisted shapes to generate chiral fields, and use them to identify the chiral structures of proteins.

Physics and AstronomyResearchElectromagnetic and Acoustic MaterialsResearchPlasmonics and Quantum Theory Plasmonics

Electromagnetic radiation can only be controlled on length scales down to a little below its wavelength, a few hundred nanometres for visible light, this accounts for the usual resolution limit of optical microscopes and telescopes. Without a means to control light on length scales down to a few nm, both nanoscience and nanotechnology will be much the poorer. However, plasmonics offers an approach based on using the localised surface plasmon resonances of metal particles to control light below the wavelength limit, down to the required nanometre length scales.

In the past decade there has been a surge of interest in surface plasmon-polaritons (SPPs), light waves bound to interface of a conductor by free charges (see figure 1). To date, most of the research into SPPs has been limited to frequencies near metallic plasma frequencies (i.e. in the visible and IR spectral regions), where the electric field of SPPs is strongly confined to a thin region at the metal surface. The capability of SPPs to confine electromagnetic energy at the interface of a conductor makes them useful for many applications where efficient guiding of light on very small length scales is important. Such applications successfully demonstrated in the lab environment include sub-wavelength microscopy and optics, non-linear optics and photolithography. Furthermore, since SPPs can support higher frequencies than electrical cables, SPPs have also been proposed as a means of efficiently transmitting information.

Localised surface plasmon resonances (LSPR) comprise electromagnetic fields that are bound to a metallic object, for example a nanoparticle, through the interaction of the electromagnetic field with the free electrons in the surface of the metal. This interaction is resonant at a frequency (wavelength) that depends strongly on the particle’s size, shape (see figure 2), composition and environment. At resonance the fields associated with these modes are very significantly enhanced, they are also evanescent or near-field in character, falling exponentially in strength with distance away from the particle. Crucially, this means that the light may be localized into a volume of space only ~10 nm in dimension. We are developing this approach for in different parts of the spectrum: in the visible regime by using metallic nanostructures, and also via structuring of metals in the microwave regime ("spoof" plasmons).

In the THz regimes we are able to exploit the advantages of plasmonics using patterned graphene or semiconductors. We are also seeking ways to add functionality to our systems, e.g. through the addition of gain (in the visible), or through photon induced carrier modulation to achieve tuneability (in the THz).

Many important biological and pharmaceutical molecules are twisted. Perhaps the most well known twisted biological molecule is the double helix of DNA. This sense of twist, a property known as chirality, is linked to molecular structure and hence biological function. An essential means to discover the sense of a molecules twist is through its interaction with circularly polarized light, a chiral form of light. This forms the basis of several important optical techniques, referred to as chiroptical spectroscopies, which are able to identify the structure of molecules. However, these methods are inherently limited in sensitivity: they therefore require relatively large amounts of material and suffer from limitations in application.

The chiral length scale of light (i.e. the length over which a twist occurs) is normally given by its wavelength. The inherent weakness of conventional chiroptical techniques is due to the mismatch with the chiral length scale of molecule, which is orders of magnitude smaller. However, it has recently shown that this barrier can be overcome. Using nanotechnology, one can engineer structures which bend local electromagnetic fields in space, giving them an intrinsically shorter twist. In the very first demonstration of the concept [1], we utilized metallic nanoparticles with twisted shapes to generate chiral fields, and used them to identify the chiral structures of proteins. Using this new technique, enhancements in sensitivity over conventional chiroptical spectroscopies approaching six orders of magnitude were found. This discovery is completely counter-intuitive and extraordinary. A complete explanation of these experimental results, though borne out through electromagnetic modelling [2], has yet to be given. It is our aim to construct a physical under-standing of both the generation of these so-called “superchiral” electromagnetic fields and their subsequent interaction with chiral matter. How is electromagnetic chirality generated in the near-fields of such handed structures? How is angular momentum manifested? The answer to these questions are central to understanding and exploiting the discovery of so-called superchiral electromagnetic fields.