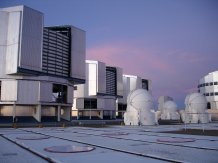 The Paranal Observatory in Chile, home to the world-leading VLT array. 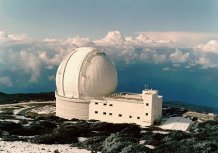 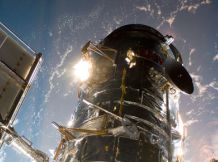 Our academics make use of data gathered by the Very Large Telescope array (VLT), both remotely and by visiting the facility.

The VLT is the flagship facility for European ground-based astronomy at the beginning of the third Millennium. It is the world's most advanced optical instrument, consisting of four Unit Telescopes with main mirrors of 8.2m diameter and four movable 1.8m diameter Auxiliary Telescopes. The telescopes can work together, in groups of two or three, to form a giant 'interferometer', the ESO Very Large Telescope Interferometer, allowing astronomers to see details up to 25 times finer than with the individual telescopes.

The VLT array is located at the Paranal Observatory in Cerro Paranal, within the Atacama desert of northern Chile.

The CHARA array combines the light from six telescopes separated up to 330 meters. Together with partners at the University of Michigan, we are building the MIRC-X instrument for CHARA, which is the only existing 6-telescope beam combiner and the infrared imaging instrument with the highest angular resolution world-wide. We use CHARA/MIRC-X to search for signatures of planet formation in protoplanetary discs, to study the multiplicity of stars and to image stellar surface structures.

Several of our academics use the William Herschel Telescope (WHT) at El Roque de Los Muchachos Observatory in La Palma. At 4.6m in diameter it is the second largest in Europe and despite being of modest size nowadays is one of the most scientifically productive telescopes in the world.

Dr David Sing and his team make use of NASA's world-famous space telescopes to detect the atmospheres of extrasolarplanets.

The Hubble Space Telescope (HST) was carried into orbit by a space shuttle in April 1990. Although not the first space telescope, Hubble is one of the largest and most versatile, and is well-known as both a vital research tool and a public relations boon for astronomy. The HST was built by the United States space agency, NASA with contributions from the European Space Agency, and is operated by the Space Telescope Science Institute. The HST is one of NASA's Great Observatories, along with the Compton Gamma Ray Observatory, the Chandra X-ray Observatory, and the Spitzer Space Telescope.

The Spitzer Space Telescope (SST), formerly the Space Infrared Telescope Facility (SIRTF), is an infrared space observatory launched in 2003. It is the fourth and final of NASA's Great Observatories. The planned mission period was to be 2.5 years with a pre-launch expectation that the mission could extend to five or slightly more years until the onboard liquid helium supply was exhausted. This occurred on 15 May 2009. Without liquid helium to cool the telescope to the very cold temperatures needed to operate, most instruments are no longer usable. However, the two shortest wavelength modules of the IRAC camera are still operable with the same sensitivity as before the cryogen was exhausted, and will continue to be used in the Spitzer Warm Mission.