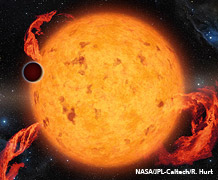 A team of international researchers have discovered the youngest fully-formed exoplanet ever detected, orbiting a young star 500 light years from Earth.

The newfound planet, known as K2-33b, most closely resembles Neptune in size when compared to planets in our own solar system, and orbits its star once every five days.

Researchers behind the discovery, which include Dr Sasha Hinkley of the University of Exeter, believe the planet is only five-10 million years old – as so still in its infancy in astronomical terms and when compared to Earth, which is 4.5 billion years old.

It also means it is the youngest, fully formed planet to have been identified and one of the few newborn planets to have been discovered to date.

The research team hope that the pioneering discovery will help astronomers to gain a greater understanding of the processes behind the evolution of planets across the galaxy.

The research is published in respected scientific journal Nature  on Monday, June 20 2016.

Dr Hinkley, a Senior Lecturer in Astrophysics and Astronomy at Exeter, described the discovery as “providing am extraordinary snapshot of the planet formation process.”

He said: “It is extremely rare to find a planet at this stage of its infancy, and gives us a unique opportunity to try and understand more about how all planets form and develop, including Earth. We would really like to know if this planet formed at its present location, or perhaps formed much farther from the star, and moved much closer in.”

“This is a crucial development, as it will give us the opportunity to discover a more in depth understanding of the life cycle of planetary systems. In the same way that a person’s development is more easily understood if you can study them from being a baby, through childhood and into adulthood, so our understanding of the planets will only increase by learning more about them during their early existence.”

The team of astronomers detected the new planet using NASA's Kepler space telescope, during its K2 mission, which identified a recurring dimming in the light emitted by the planet's host star that hinted that an orbiting planet was regularly passing in front of it.

When stars form, they are encircled by dense regions of gas and dust, called protoplanetary disks, from which planets form. By the time a young star is a few million years old, this disk has largely dissipated and planet formation is mostly complete.

The star orbited by new exoplanet has a small amount of disk material left, indicated by observations from NASA's Spitzer space telescope, suggesting it is in the final stages of dissipating.

"Astronomers know that star formation has just completed in this region, called Upper Scorpius, because roughly a quarter of the stars still have bright protoplanetary disks," said Trevor David, the first author on the paper and a graduate student working with professor of astronomy Lynne Hillenbrand. "The remainder of stars in the region do not have such disks, so we reasoned that planet formation must be nearly complete for these stars, and that there would be a good chance of finding young exoplanets around them."

Dr Hinkley said that the team were able to study how frequently the light emitted from the star dimmed, and by how much, to determine the orbit and size of the new exoplanet.