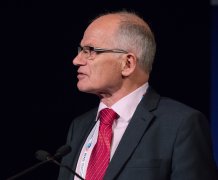 Professor Roy Sambles FRS from the University of Exeter has received a knighthood in the Queen’s Birthday Honours, announced today.

Professor Sambles, from Exeter’s Physics and Astronomy department, received the distinguished honour for services to scientific research and outreach.

He has been professor of experimental physics at the University since 1991. His research now focuses on the electromagnetic and acoustic properties of metamaterials encompassing potential developments in ‘cloaking’ as well as radio frequency communications.

His earlier work included studies of the fundamentals of melting, spin waves in alkali metals, liquid crystal optics and plasmonics.

Speaking about receiving the knighthood, Professor Sambles Roy paid tribute to both his family and colleagues, and also acknowledged the importance of his Christian faith.

Professor Sambles said: “It is an absolute honour to receive a knighthood. I have been fortunate to receive support from so many places, including my amazing wife Sandy, our children and grandchildren, and my Christian faith and God’s guidance.

“I was also fortunate to have the support of a visionary Head of Department, Trevor Preist, while I have enormously valued working with and alongside some extremely talented colleagues and research students.

“Success has come through sheer hard work driven by a natural curiosity, but also it has always been so important to me to treat everyone equally and nurture and encourage them when I can.”

Born and educated at school in Cornwall, Professor Sambles has worked at the University of Exeter for more than forty years and currently lives in Crediton in Devon. After taking his undergraduate degree and doctorate at Imperial College London, he was a research fellow at Imperial for two years before being appointed as a lecturer in physics at Exeter in 1972.

He became a senior lecturer there in 1985, a reader in 1988 and was made professor in 1991. He holds more than 20 patents and his research has helped to underpin technological developments at BAE, Sharp, QinetiQ, Hewlett Packard and the Defence Science and Technology Laboratory.

Professor Sambles was  for six years a member of the government funding agency for scientific research in UK Universities, the Engineering and Physical Sciences Research Council (EPSRC), and has served on many EPSRC committees and panels.