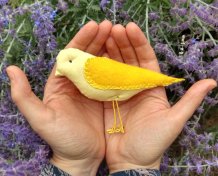 One of the canaries sewn in Exeter. Credit Global Systems Institute

Staff and students from the University of Exeter have joined a national campaign to sew yellow canaries as a symbol of the climate crisis.

Members of the University's Global Systems Institute made the birds from fabric leftovers.

The canaries will be sent to Members of Parliament to represent the urgent need for action – just as canaries were once used in coal mines to warn of harmful gases.

The "gentle protest" is intended to bring people together and remind MPs of widespread climate concern ahead of the vital COP26 UN climate change summit in Glasgow later this year.

"My work brings me face-to-face with the possible impacts of climate change, which can feel overwhelming," said Ruth Chapman, a PhD student in climate modelling at the University of Exeter and one of the coordinators of the Exeter Women in Climate Network, which hosted the event.

"I love how this campaign gives a voice to people who might not have the confidence to take part in street protests, and helps them channel their passion for protecting their community.

"By taking part in this campaign, I'm joining people across the country who are saying that we want to see decisive action from our politicians on this pressing issue."

The national "canary craftivists" scheme is run by the Craftivist Collective, who use handicrafts as a tool to bring people together for quiet, creative activism.