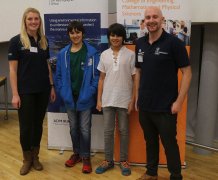 The public were given a fascinating insight into what it takes for scientists to be ‘diving home for Christmas’ during the special festive event.

Families from across the South West were given a fascinating and inspirational insight into what it takes for scientists to be ‘diving home for Christmas’ during a special festive event, organised jointly by the Institution of Mechanical Engineers (IMechE) and the University of Exeter.

Hundreds of people of all ages came together to take part in an interactive, fun, family-friendly event which unwrapped the various ways in which the sound of the sea affects both the marine environment and its inhabitants.

The free IMechE Christmas Lecture, called Sound in the Sea: Diving Home for Christmas was held in the University’s Forum Alumni Auditorium on Wednesday, December 11th.

The lecture highlighted how scientists at the UK Hydrographic Office use environmental information to understand and help protect the marine environment.

During the event, the audience heard from climate scientist turned civil servant Tom Cropper, who currently heads up a team of marine scientists at the UK Hydrographic Office.

They were also given a fascinating insight into the research carried out by Senior Marine Biologist Stephanie Allen, whose work includes studying the long-term changes to oceanic plankton.

Speaking after the event Professor Chris Smith,  from Exeter’s College of Engineering, Mathematics and Physical Sciences said: “Families always love our interactive Christmas lecture and this one was no different. This the best event I know of, which allows children get to right in the middle of engineering experiments, this is so much better that the internet or TV.  We want to inspire the next generation of engineers who will make a real difference to the world.”

John Earp, Chair of the Devon & Somerset IMEchE committee, added: “We continue to strengthen our partnership with the University of Exeter.  This Family Christmas Lecture is hugely successful, and is one of the IMechE’s largest in the country.

One of the audience members, Danny Amaratunga Brooks, Year 8, South Dartmoor Community College, described the event as “awesome”. He added: “It really helped me understand how sound moves around in the sea. It made me really interested in being a marine engineer.”

Graham Cole CBE, University of Exeter Council member, former Chairman of Agusta Westland Helicopters also praised the event. He said: “After a long career in Engineering, with some of the world’s leading companies, I understand how important it is to inspire and excite younger people about Engineering and Science. I am delighted the university works with the IMechE to host this Christmas event.”

Jim Sibson, Head of Research and Partnerships, Babcock International said: “The Christmas family lecture is a fantastic initiative to encourage young people into Engineering and Science in a fun filled way. I am so pleased to see hundreds of people of all ages coming along tonight.”