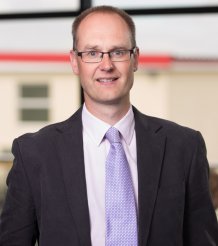 One of the UK’s foremost mechanical engineers, Steve Austen, has been appointed as an Associate Honorary Professor at the University of Exeter.

At SC Group – which includes the British designer and developer of high mobility defence vehicles, Supacat - Steve is responsible for the overall governance, leadership and direction of engineering activities and capabilities, globally.

He is also a Chartered Engineer, Naval Architect and Fellow of the Institution of Mechanical Engineers with more than 30 years’ experience in R&D, design, supply and support across the composites, defence and marine sectors.

Prior to joining the SC Group, Prof Austen was Head of Engineering at the Royal National Lifeboat Institution, responsible for the design and through life support of plant and equipment, including the new Shannon Class all weather lifeboat and associated launching system, which was successfully introduced into service in 2014.

As well as previously working for the Ministry of Defence in a number of new build and naval support project teams, Prof Austen was also named the Institution of Mechanical Engineers ‘Engineer of the Year’ in 2015.

Speaking about his appointment, Prof Austen said: “I’m really honoured that the University have appointed me to this role. Over the years, I’ve been involved in a number of PhDs and KTPs, alongside chairing university/industry collaborations that have helped to solve some seemingly intractable problems.

“These collaborations have always been immensely rewarding and thought provoking, and this appointment should hopefully mean I can help with more of these.

“For SC Group, the appointment is recognition of the nature and value of the engineering development work carried out in partnership with the students and staff of the University of  Exeter over a number of years, and a commitment to continue developing the relationship in areas of common interest for the benefit of both organisations, adding to a track record of successful innovation across a number of advanced engineering sectors.’

“As Engineering Director, Steve has always been keen to pick up on developments in technology, and keep us informed of challenges in the defence and other sectors. This honorary appointment recognises the strong and fruitful relationship there is between the two organisations.

“Steve and myself have had great fun and pleasure working with more than 30 undergraduate students on projects going back several years. Some have led on to great things, such as prompting development of a hybrid and electric drive powertrain, such as shown on the H-ATMP vehicle unveiled at the DSEI exhibition in 2019. The next concept is an optionally-manned vehicle, which can become driverless if required.”