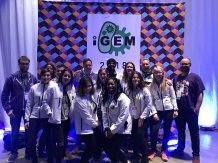 Exeter’s iGem team is made up of undergraduate and masters students in Physics, Computer Science and Biosciences

University of Exeter students have found a way to produce oxygen on Mars, earning a gold medal at a prestigious competition.

In a project for the International Genetically Engineered Machine (iGEM) competition in Boston, USA, the Exeter team created a method of converting perchlorate in the Martian soil to oxygen.

As well as engineering a bacterium to do this, they designed a bioreactor to contain the reaction on the Red Planet and found a way to harvest the oxygen.

NASA aims to have humans on Mars by 2030, and oxygen production is one of many challenges that must be overcome to make this possible.

This is Exeter’s fifth consecutive gold medal in the iGEM competition, which this year attracted more than 300 teams from around the world.

“We are thrilled to receive a gold medal,” said team member Juliana Sackey.

“It’s the culmination of a summer full of new experiences in team work, organisation and discovery in synthetic biology.

“It was a great ending to our trip to Boston and we’d like to say a big thank you to our supervisors at the university and everyone that helped us along the way.

“Our project was initially inspired in two ways; bioremediation of water sources and space exploration.

“We found a link between the two in perchlorate, an ion found in contaminated water sources on Earth that could potentially help humans breathe on Mars.”

Martian topsoil is 1% perchlorate and, although perchlorate salts are toxic to humans, the team thought it might be possible to reduce perchlorate into chloride and breathable oxygen.

They interviewed many experts contributing towards the effort to get to Mars.

“They were meeting regularly to discuss ideas and worked incredibly hard on this project.

“The competition was fierce this year, and a few rule changes meant that we had to raise our game.”

He added: “As ever, iGEM is a massive team effort. I am very grateful to those researchers and PhD students who, in addition to their day jobs, helped the students in the lab: Dr Chloe Singleton, Dr Paul James, Dr Jamie Gilman, Dr Mark Hewlett, Dr Liz James and Dan Barber, an iGEM student from the 2016 cohort.”