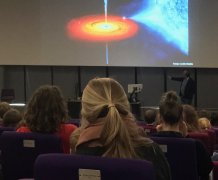 Hundreds of pupils from across Devon and Cornwall joined staff and students for the CEMPS Christmas Lectures.

For the fourth year in a row, the College of Engineering, Mathematics and Physical Sciences (CEMPS), hosted a series of engaging scientific talks to showcase some of the research and expertise within the College, along with the variety of industries and processes that it contributes to.

The free event was aimed at the school pupils, but was open to all.  Held in the Forum’s Alumni Auditorium, it was also an opportunity for the pupils to explore the heart of the Streatham Campus and get a taste of university life.

Professor Pete Vukusic, CEMPS Associate Dean for Education, welcomed the audience before handing over to the event host - senior mathematics lecturer, Dr Gihan Marasingha. Dr Corrina Cory led the lectures with an introduction to injury biomechanics, Lidar scanning, and a summary of how her expertise has been used in criminal investigations, as well as to inform the design of buildings to reduce the occurrence and impact of accidents.

Dr Nicolas Pugeault followed, providing a further applications for Lidar scanning - this time in driverless cars. His lecture discussed some of the challenges in developing computer vision and autonomous vehicles.

The audience was then taken on a journey into space with Professor Tim Harries,  learning about the short but spectacular lives of the Galaxy’s most massive stars, and how their power power-to-mass ratio is roughly equal to a hamster on a wheel.

Dr Hannah Hughes concluded the event with a return to earth and a look beneath the surface at how magma is formed. She went on to talk about how and what metals are formed in volcanic rocks, where in the world they occur, and how they can be extracted responsibly to sustain our technology-hungry world.