Multiphoton Microscopy (MPM) is a type of laser scanning microscopy that derives its contrast from non-linear optical properties of a sample and is currently attracting a great deal of interest across all fields of biophysics.

Non-linear imaging has many advantages over standard fluorescence confocal laser scanning microscopy, with the principle advantages being an increase in depth penetration and stain-free molecular contrast.

The Multiphoton Imaging and Spectroscopy Laboratory is sponsored by Olympus UK Ltd.

MPE is the most simple form of Multiphoton Microscopy (MPM) which is used to excite fluorescence. A pulsed laser is used to provide simultaneous excitation with two (or three) photons of low energy, exciting the fluorophore to the same level as one high energy photon. MPE has many advantages over normal laser scanning microscopy.

The use of lower energy photons (infrared) reduces damage to the sample and also permits deeper penetration into scattering samples. Multiphoton excitation occurs only at the focal plane, removing the need for pinhole apertures.

As well as excitation of extraneous fluorophores, MPE can be used to excite indigenous tissue components such as NAD(P)H, flavins, and porphyrins.

SHG is a second-order nonlinear optical process, which requires an environment without a centre of symmetry to produce signals.

Two photons (ωp) are mixed in the sample to generate a third photon (2ωp). Several indigenous tissue components are known to exhibit SHG which can be used to generate label free images.

Collagen fibres are a well-known source of SHG. SHG deposits no energy into the sample due to the emitted SHG photon energy being equal to the total absorbed excitation photon energy.

CARS is a third order nonlinear optical process in which a pump field Ep and a Stokes field Es interact with a sample to generate a signal field Eas at the anti-Stokes frequency of ωas = 2ωp - ωs. When ωp - ωs is tuned to be resonant with a molecular vibration (&Omega), the CARS signal can be significantly enhanced, producing a vibrational contrast. 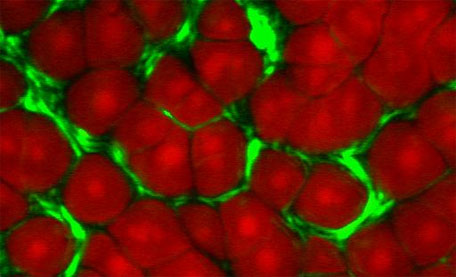 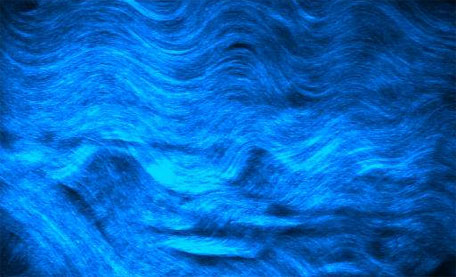 Collagen in a rat tail tendon viewed with SHG 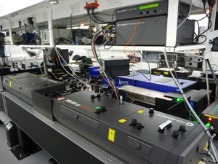