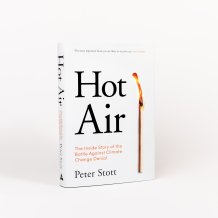 Denial of climate science emerged simultaneously with key scientific discoveries about humanity's impact on our planet, according to a new book.

Professor Peter Stott – author of Hot Air: The Inside Story of the Battle Against Climate Change Denial – began 25 years ago in the then-obscure field of the detection and attribution of climate change.

As scientists saw increasing evidence of global warming – and detected the "fingerprints of humans" as the cause – organised climate-change denial rapidly became a powerful force.

Examining how and why this happened, the book says so-called "climate sceptics" have "weaponised doubt in the service of the fossil fuel industry".

"In the face of increasing evidence that humans were causing climate change, we saw increasing determination from a whole range of lobby groups to deny it," said Professor Stott, of the University of Exeter and the Met Office.

"There was a small group of scientifically trained people who cherry-picked data and produced arguments that sounded scientific."

The book includes some of Professor Stott's experiences during the fierce debate of recent decades.

He attended a 2004 meeting in Moscow that became a "show trial" of climate science, where the "climate denier community" gathered to prevent Russia ratifying the Kyoto Protocol.

On the flight home from Russia, he saw someone reading a UK newspaper that described global warming as a "load of poppycock".

"It seems odd now, but back then certain aspects of climate science were still fairly obscure, even in academia," said Professor Stott, who will lead the Science Pavilion for the Met Office at the COP26 climate change conference in Glasgow next month.

"However, things were beginning to change.

"I vividly remember attending a press conference in Paris in 2007, and it really seemed that people were listening.

"The BBC broadcast the evening news live from the conference. We felt we had some momentum."

But in 2009, the Copenhagen climate summit ended in failure – following what the book calls a "vicious attack on science by the climate deniers" in the wake of the Climategate scandal.

"We were on trial," said Professor Stott, and member of Exeter's Global Systems Institute.

"However, despite the negative consequences, this scandal led to far greater interest in scientific details – and that focus helped the media, the public and policymakers understand what the evidence was saying.

"It took time – time we didn't have to waste – but in 2015 we reached the Paris talks, in which the targets under discussion were based on scientific evidence."

And this month, two climate scientists, Syukuro Manabe and Klaus Hasselmann, were awarded the Nobel Prize in Physics.

It is recognition that climate science and the detection and attribution of climate change is no longer an obscure field of research like it was 25 years ago.

Professor Stott's work focusses on extreme weather events, and he believes recent storms, floods, heatwaves and droughts have led to a growing acceptance that climate change "really is here".

"These extreme events have shown us again and again how vulnerable we are, all around the world," he said.

"This may be the end of straightforward climate-change denial.

"However, we need urgent international action, and there are still plenty of attempts to delay that."

Professor Stott is hopeful that agreements can be reached at COP26 to dramatically cut global emissions of greenhouse gases.

"This is feasible and achievable, and the benefits range from protecting the climate to improving human health and economies," he said.

Hot Air is out now in hardback, published by Atlantic Books.