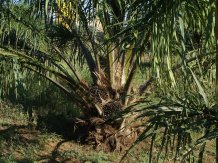 "Oil palm is one of the most productive crops on the planet, easy to grow, has large profit margins and is incredibly versatile."

Mapping global impacts for all vegetable oils key to sustainability

A lack of data on the environmental and social impacts of vegetable oil crops stands in the way of informed discussions about their relative sustainability, according to a new study by members of the IUCN’s Palm Oil Task Force.

The authors say that more accurate, high-resolution maps and data on a range of vegetable oils are needed to help decision-makers determine which crops should be grown where in order to sustainably meet rising global demand.

The paper, published today in the journal Nature Plants, presents new data for oil palm plantations around the world and provides an overview of the environmental and biodiversity impacts of this crop.

It then compares these, where possible, with the impacts of other oil crops such as rapeseed, soy or coconut, within the limits of available data.

The paper confirms that oil palm plantations have had significant impacts on key species and ecosystems in the tropics, but reveals a lack of information on impacts of other vegetable oils.

"A lot of people are now familiar with oil palm and the impact of its cultivation on the environment and wildlife," said co-author Dr Jesse F. Abrams, of the Global Systems Institute and the Institute for Data Science and Artificial Intelligence, both at the University of Exeter.

"However, the solution is not as easy as boycotting oil palm or replacing it with another crop.

"Oil palm is one of the most productive crops on the planet, easy to grow, has large profit margins and is incredibly versatile.

"To meet global oil demand without oil palm would require switching to less efficient vegetable oils which may drive greater deforestation and biodiversity loss, as well as lead to a higher use of pesticides.

"Furthermore, the boycott of palm oil would threaten thousands of people’s livelihoods.

"Instead, the focus should be on forcing companies to improve their production methods, producing palm oil in a sustainable way using the best available social and environmental practices.

"This goes for oil palm, as well as for all other crops."

Lead author Erik Meijaard, Professor at the University of Kent and Chair of the IUCN Oil Palm Task Force, said: “The demand for vegetable oil continues to grow, and so, inevitably, will the need for agricultural land to produce it.

"When you replace a complex tropical forest with a single-species plantation, there are bound to be negative consequences on biodiversity, the climate and local communities’ health and wellbeing, regardless of the crop planted.

"In this light, it is critically important that we make sound, well-informed decisions on which crops to plant where, and in what way, to minimise their negative environmental impacts and maximise their social benefits.

“To do so, we need accurate, scientific data and high-resolution maps on all the available crops, which are currently lacking.”

The new study highlights that, while oil palm is associated with more species listed as Threatened on the IUCN Red List (321) than any other oil crop, other vegetable oils also threaten biodiversity.

Soy oil is associated with 73 species listed as Threatened, coconut with 65 and maize with 131.

Rapeseed, meanwhile, is associated with high fertiliser use and larger carbon emissions than oil palm relative to the amount of oil produced, according to the study.

Updating the 2018 IUCN situation analysis on oil palm and biodiversity, the new study finds that oil palm now makes up around 40% of the current global vegetable oil supply despite occupying only around 5.5% of the total global oil crop area (between 21.5 and 23.4 million hectares).

For comparison, soy for oil production is planted in an area of 125 million hectares, or almost 30% of oil crop area worldwide, while supplying 28% of the vegetable oil demand.

Oil palm plantations have accounted for more than half of local deforestation in, for example, Malaysian Borneo in recent decades, but are estimated to contribute moderately to deforestation globally.

No reliable data is available on the amount of deforestation other oils have caused.

“When it comes to the end use, vegetable oils are mostly interchangeable – but they differ in how productive they are and in their impacts on the environment," said co author Professor Douglas Sheil of the Norwegian University of Life Science.

"For instance, average yields for oil palm per unit area are several times those of rapeseed, soy, groundnut, cotton, coconut or sunflower.

"This implies that, if palm oil continues to play a dominant role in overall oil production, an additional 35.7 million hectares of oil plantations could meet the projected demand in 2050.

"This would mean an 8% increase in land use.

"If on the other hand, the less productive soy were used to meet this demand, an additional 204 million hectares of tropical and subtropical land would be needed, or a 48% increase compared to now.”

The study concludes that the research focus and global attention on the impacts of palm oil has led to more pressure on producers to improve practices and reduce environmental and social impacts, compared to other agricultural commodities.

Similar attention to other crops would likely drive positive change in their practices and impacts.

Thomas Brooks, IUCN Chief Scientist and a co-author of the study, said: “All crops come with trade-offs in terms of environmental and social impact.

"The better we understand these trade-offs on a local and global scale, the more sustainably we can meet the demand for agricultural commodities, which is key to meeting the Sustainable Development Goals."