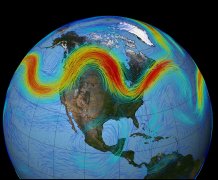 Jet stream not getting ‘wavier’ despite Arctic warming

Rapid Arctic warming has not led to a “wavier” jet stream around the mid-latitudes in recent decades, pioneering new research has shown.

Scientists from the University of Exeter have studied the extent to which Arctic amplification – the faster rate of warming in the Arctic compared to places farther south – has affected the fluctuation of the jet stream’s winding course over the North Hemisphere.

Recent studies have suggested the warming Arctic region has led to a “wavier” jet stream – which can lead to extreme weather conditions striking the US and Europe.

However, the new study by Dr Russell Blackport and Professor James Screen, shows that Arctic warming does not drive a more meandering jet stream.

Instead, they believe any link is more likely to be a result of random fluctuations in the jet stream influencing Arctic temperatures, rather than the other way around.

The study is published in leading journal Science Advances on Wednesday 19 February 2020.

Dr Blackport, a Research Fellow in Mathematics and lead author of the study, said: “While there does appear to be a link between a wavier jet stream and Arctic warming in year-to-year and decade-to-decade variability, there has not been a long-term increase in waviness in response to the rapidly warming Arctic.”

Scientists have studied whether the jet stream’s meandering course across the Northern Hemisphere is amplified by climate change in recent years.

For about two decades, the jet stream – a powerful band of westerly winds across the mid-latitudes – was observed to have a “wavier” flow, which coincided with greater Arctic warming through climate change.

These waves have caused extreme weather conditions to strike mainland Europe and the US, bringing intense cold air that leads to extreme cold weather.

In this new study, Dr Blackport and Professor Screen studied not only climate model simulations but also the observed conditions going back 40 years.

They found that the previously reported trend toward a wavier circulation during autumn and winter has reversed in recent years, despite continued Arctic amplification.

This reversal has resulted in no long-term trends in waviness, in agreement with climate model simulations, which also suggest little change in “waviness” in response to strong Arctic warming.

The results, the scientists say, strongly suggest that the observed and simulated link between jet stream “waviness” and Arctic temperatures do not represent a causal effect of Arctic amplification on the jet stream.

Professor Screen, an Associate Professor in Climate Science at Exeter added: “The well-publicised idea that Arctic warming is leading to a wavier jet stream just does not hold up to scrutiny.

“With the benefit of ten more years of data and model experiments, we find no evidence of long-term changes in waviness despite on-going Arctic warming.”

Insignificant effect of Arctic amplification on the amplitude of mid-latitude atmospheric waves is published in Science Advances.