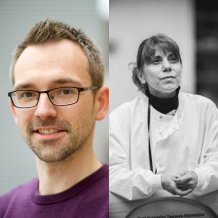 Two leading mathematicians from the University of Exeter have been selected to receive prestigious international fellowships.

Professor Krasimira Tsaneva-Atanasova and Dr Christian Bick have recently been awarded Hans Fischer Fellowships from the Institute for Advanced Study (IAS) at the Technical University of Munich (TUM) in Germany.

These awards, which run for three years, enable exceptional international scientists to explore cutting-edge, high-risk topics in their scientific research areas in partnership with a TUM research group.

The Fellowships are named for TUM professor Hans Fischer, who received the 1930 Nobel Prize in Chemistry.

Professor Tsaneva-Atanasova is a Professor in Mathematics for healthcare, and her work addresses how applications of mathematics could be used in the improvement of healthcare and healthcare technology.

She said: “In my fellowship project I will study the emergent transient dynamics of networks motivated by applications to physiology such as hormone dynamics.

“This award will allow me to work closely with experts in Dynamical Systems in the world-leading environment offered by the IAS at TUM.”

Dr Bick, a Lecturer in Mathematics at the University of Exeter, conducts research into in dynamical systems theory and applications.

His research studies the how the interplay of network topology and interactions gives rise to collective dynamics such as synchrony, frequency synchrony, and more complicated dynamics.

Dr Bick said: “I will investigate how adaptive and nonlinear network interactions, which are present for example in neuronal networks, influence the collective dynamics of coupled dynamical processes.

“My fellowship will allow me to collaborate with leading mathematicians and physicists at TUM to develop new mathematical theory and apply it to real-world systems.”