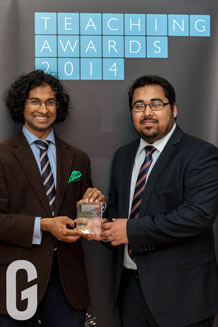 A selection of cryptic conundrums and bamboozling brainteasers, designed by a maths expert from the University of Exeter, are set to test the mental agility of the nation’s puzzle masters.

A number of puzzles set by Dr Gihan Marasingha will feature in the Today Programme Puzzle Book, which launches today (September 6th).

The compendium of challenging brainteasers features more than 280 numerical and linguistic riddles that have featured in the popular Puzzle for Today section of BBC4’s flagship morning news and current affairs programme.

Dr Marasingha has set a number of the daily challenges over the past 12 months, with some of the most popular featuring in the new book.

Amongst the puzzles that feature are In how many ways can the letters of the word EXETER be arranged? For example, REETEX is one such arrangement and Under budgetary pressure, Isca Cathedral decides to save money by recycling candles. One new candle can be formed from ten melted candle stubs. In total, how many candles can the cathedral burn from an initial inventory of 2018 candles?

Dr Marasingha, a Senior Mathematics Lecturer at the University of Exeter said: “I am absolutely delighted to feature in this wonderful new puzzle book.

“It has been an honour and a pleasure to set so many puzzles for the Today programme listeners over the months I have been involved. I’ve tried to make the topics topical, given that it is a current affairs programme, but also fun for those who try and tackle them.

“I think the Puzzle for Today section is a great way to bring maths to as wide an audience as possible. We don’t always associate maths with problem solving or riddles, so it’s wonderful to be able to bring the subject to the nation’s attention in a fun and accessible manner.”

The book, which is available in both paperback and e-book editions, allows readers to tackle the conundrums that have been frustrating and confounding the nation on Radio 4's Today programme.

Chapters are introduced by Tom Feilden, the BBC Science Editor, and include sections on common-sense conundrums, maths and language, celebrity setters and even a festive selection of Christmas crackers.

Today has been voted the most influential news programme in Britain in setting the political agenda, and in February 2017recorded its highest ever audience figures, reaching 7.45 million weekly listeners.