The Global Carbon Project has published its full analysis for 2021, reinforcing the need for rapid emissions cuts.

In the following article, Professor Pierre Friedlingstein, of Exeter's Mathematics department and Global Systems Institute (GSI), and Alissa Haward, GSI Project Manager, discuss the findings and their relevance to the climate crisis.

Our analysis from the Global Carbon Budget, published this week concludes that if we want to reach net zero CO2 emissions by 2050 we must cut global CO2 emissions by about 1.4 billion tonnes each year, starting now.

The Intergovernmental Panel on Climate Change (IPCC) say limiting warming to around 1.5°C requires global greenhouse gas emissions to peak before 2025 at the latest and be reduced by 43% by 2030.

Both of these findings support the requirement for urgent and transformative action for a fair and sustainable future.

Early this month, the IPCC launched the last of its three major reports that make up the Sixth Assessment Cycle (AR6). The synthesis report is due out in September this year.  The message from all three reports is clear. Transformative action on climate change is needed urgently.

The findings of the “Climate Change 2022: Mitigation of Climate change” report are not surprising but nevertheless present some stark challenges ahead. Echoing the conclusions of the IPPC reports “Impacts, Adaptation and Vulnerability” and “The Physical Science Basis” (the other reports in AR6), IPCC chair Hoesung Lee said at the launch of the report on mitigation: “We are at a crossroads. This is the time for action. We have the tools and know-how required to limit warming and secure a liveable future.”

Climate change isn’t something we can give up on. The consequences of doing nothing or not enough are too catastrophic. Past failings to act, or act quickly enough, have left us with very little time to limit global warming to 1.5°C and stop the worst impacts of climate change from happening.

The good news is we haven’t quite run out of time yet, although every year of inaction makes it more challenging.

Just over 20 years ago the Global Carbon Project (GCP) was established in recognition of the scientific challenge and critical importance of the carbon cycle for the Earth’s sustainability. Its aim was to bring together the international scientific community to establish a common and mutually agreed knowledge base to support policy debate and action to slow down and ultimately stop the increase of greenhouse gases in the atmosphere. This aim remains the same today.

Since 2006, the GCP has produced the Global Carbon Budget, an annual report that looks at the trends in global carbon emissions and sinks. The tracking of these quantities annually is a key measure of progress towards the established goals of the Paris Agreement. The report is an accurate assessment of human induced carbon dioxide (CO2) emissions and their redistribution among the atmosphere, ocean, and terrestrial biosphere. It quantifies the global carbon budget and its uncertainties. Year on year the report has evolved, building on established methodologies in a fully traceable and transparent manner and is widely recognised as the most comprehensive report of its kind.

The latest report, the Global Carbon Budget 2021, launched and presented at COP26 in Glasgow, includes contributions from a large fraction of the carbon cycle research community (94 people across 70 organisations and 18 countries) and reveals the latest data from 2020 and projects global carbon trends for 2021. The full analysis is published this week.

Here we look at some of the conclusions from the IPCC and offer some further insight from the Global Carbon Budget 2021, the findings of which are used widely including by the IPCC where they make a significant contribution to the IPCC analysis around CO2 sources and sinks.

The IPCC concludes that between 2010 and 2019 average annual global greenhouse gas emissions were at the highest level in human history, but the rate of growth has slowed.

Figure 1, taken from the Global Carbon budget 2021, illustrates the trend in global fossil emissions since 1990. In line with the IPCC report, global fossil CO2 emissions, the largest component of global GHG emissions, have been rising steadily. The figure also shows an unprecedented drop in emissions in 2020. 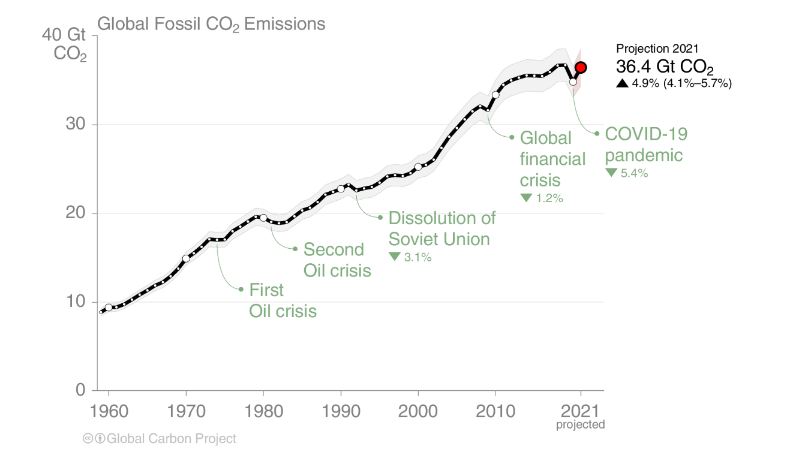 In 2020, fossil CO2 emissions fell by 1.9 billion tonnes as a direct consequence of global lockdowns enforced to stem the spread of COVID-19, a drop of 5.4% from the year before.

As lockdowns lifted there was hope that world leaders would grasp this opportunity to set the planet on a different path that would limit global warming to 1.5°C. Instead, our estimate for 2021 shows there was a rapid rebound in emissions as economies recovered from the pandemic.

Figure 2 shows emissions from coal and gas use are set to grow more in 2021 than they fell in 2020, but emissions from oil use remain below 2019 levels. 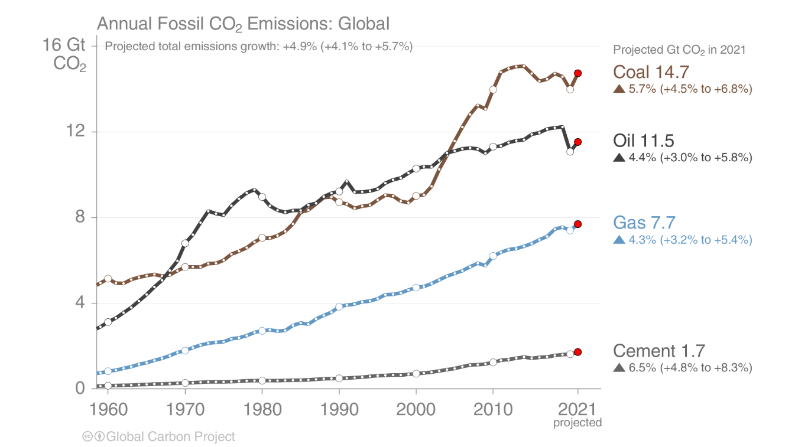 According to the IPCC, since 2010, there have been sustained decreases of up to 85% in the costs of solar and wind energy, and lithium batteries for passenger electric vehicles. There has been an increasing range of policies and laws that have enhanced energy efficiency, reduced rates of deforestation and accelerated the deployment of renewable energy. IPCC Chair Hoesung Lee added: “I am encouraged by climate action being taken in many countries. There are policies, regulations and market instruments that are proving effective. If these are scaled up and applied more widely and equitably, they can support deep emissions reductions and stimulate innovation.” 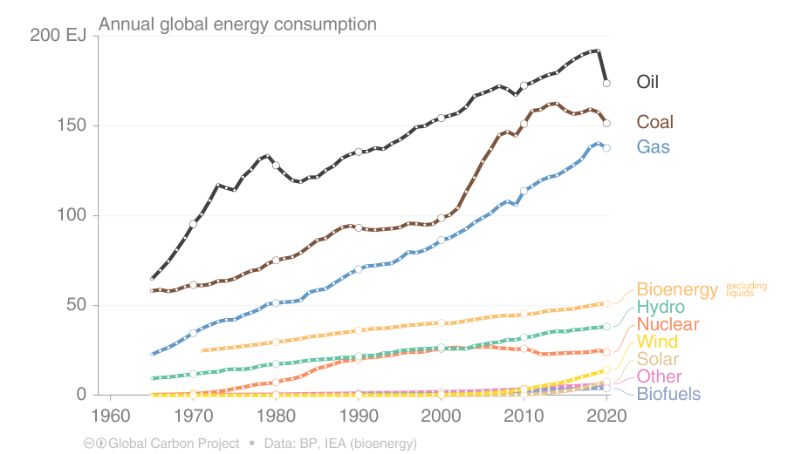 In the GCB we looked at energy use by source. Figure 3 shows renewable energies continue to grow, aided by the decreases in costs and increases in renewable friendly policies over the last decade, as highlighted by the IPCC. However, you can see renewable energies still need to grow faster to replace fossil energy consumption. Unfortunately, early signs show that global investment in a green economy in post-Covid recovery plans have been insufficient so far, on their own, to avoid a substantial return close to pre-Covid emissions as demonstrated in Figure 1 – a further illustration of the need to apply regulatory drivers and incentives fairly across the globe to stimulate deep emission cuts whilst scaling up renewables and energy efficiencies.

How realistic is it then that we can reach net zero emissions by 2050?

The IPCC have also said: “The next few years are critical. In the scenarios we assessed, limiting warming to around 1.5°C (2.7°F) requires global greenhouse gas emissions to peak before 2025 at the latest, and be reduced by 43% by 2030; at the same time, methane would also need to be reduced by about a third. Even if we do this, it is almost inevitable that we will temporarily exceed this temperature threshold but could return to below it by the end of the century.”

Three years ago, 30% of the global economy was covered by targets to reduce emissions to net-zero by the middle of the century. Now after pledges announced as part of the Glasgow Pact, agreed at COP26, 90% of the world is covered. So, this at least looks like an encouraging starting point.

Our analysis shows to reach net zero CO2 emissions by 2050 we must cut global CO2 emissions on average by about 1.4 billion tonnes each year – an amount comparable to the unprecedented drop in emissions we saw in 2020 (illustrated in Figure 1). According to our analysis, this scale of the action needs to start immediately.

The IPCC have highlighted the important role agriculture, forestry and other land use can play in providing emissions reductions as well as removing and storing CO2 at scale and therefore helping to achieve net zero. But it also warned that land cannot compensate for delayed emissions reductions in other sectors.

Natural sinks in the land biosphere and oceans are vitally important in combating climate change. They remove a considerable amount of the anthropogenic carbon dioxide emitted into the atmosphere. But as IPCC says they should not be used to justify any delay in action to cut emissions.

Using the IPCC WG1 estimate and updating to the current emissions, our analysis concludes that to have a 50% chance of limiting global warming to 1.5°C, we estimate the remaining carbon budget has now shrunk to 420 billion tonnes, equivalent to just 11 years at 2021 emissions levels. 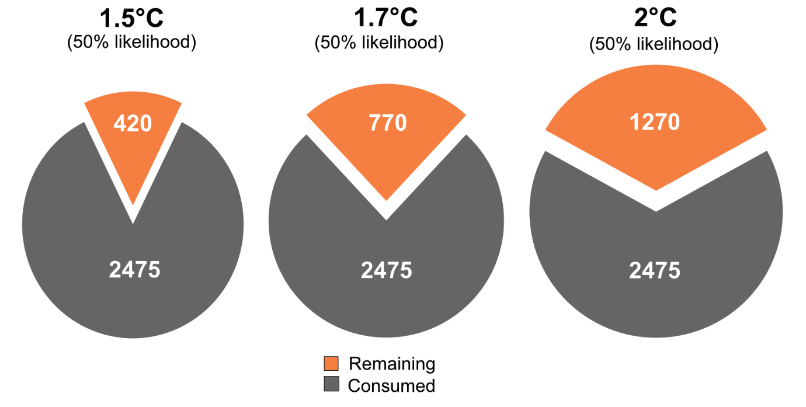 As IPCC chair Hoesung Lee said: “We are at a crossroads."

We need to act. We need to take more action quicker and better. We have the know-how – we just need the will from all sectors to do it.

The 2021 edition of the Global Carbon Budget is published in the journal Earth Systems Science Data. In the report there is lots more analysis on carbon emission and sinks which can all be found and downloaded the GCP website. Our next edition Global Carbon Budget 2022 will be published at COP27 in Egypt and will show the latest trends in CO2 emissions and sinks in 2021 and projects CO2 emission trends for 2022.