[i] Verification, Validation and Certification, 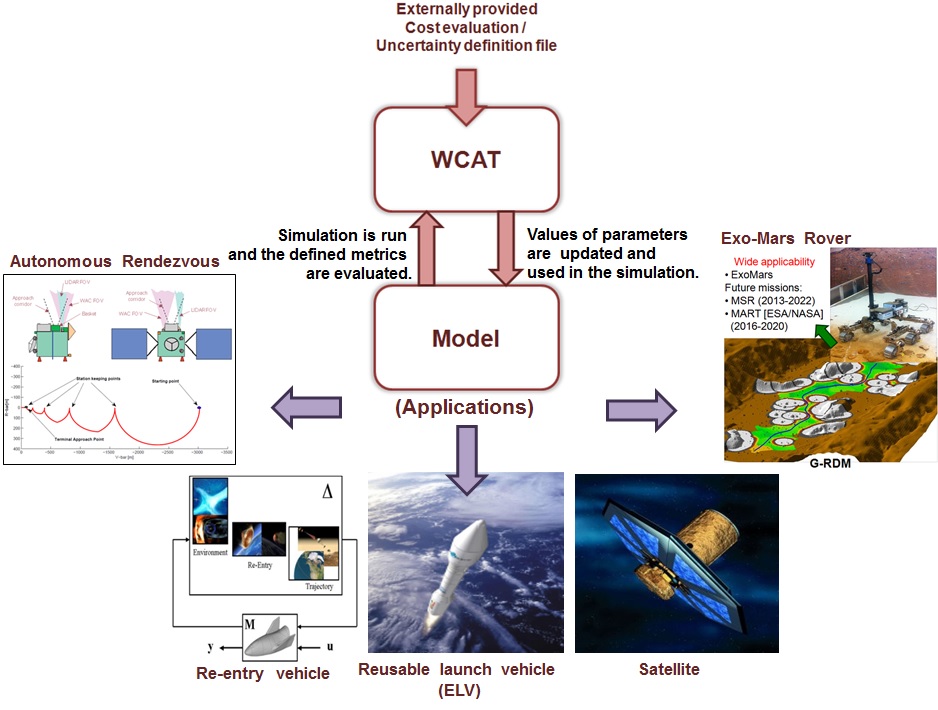 In recent years, we have been developing specialised simulation- and optimisation-based analysis tools for tuning and validation of complex control systems. It is well known that the vast majority of the budget for any prototype design is spent in this activity. We are particularly interested in assessing the robust performance of complex realistic, industrial-standard controllers for different prototypes, mainly in the area of aerospace applications, with large numbers of uncertainties, either epistemic or aleoteric, associated with the representative model. It is imperative for the clearance of a design, to have certain identified variables - normally the control signals and variables associated with system safety in the presence of hundreds of uncertain parameters - respect certain a-priori definted limits all the time to ensure the satisfactory safe operation and thus success of the mission. 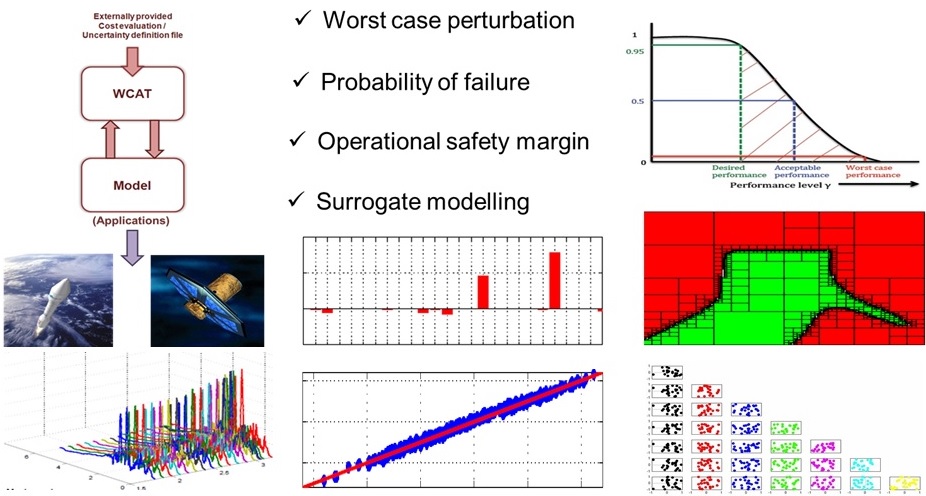 At Exeter, we develop analysis tools (Worst Case Analysis Tools: WCAT - II) to address this crucial problem, which relies on a suite of single- and multi-objective optimisation algorithms and polynomial chaos surrogate modelling. The applications/missions that we have been investigating include flight control, attitude control of satellites (for Earth observation), control laws for the European reusable launce vehicle (RLV), integrated guidance, naviation and control (GNC) of autonomous rendezvous in Mars Sample Return (MSR), and GNC of Entry, Descent and Landing Systems (EAGLE). To respect and protect the legacy controllers and models from industry, the proposed tools treat them as 'black-box' with access limited to certain input and output variables.

We are also interested in tuning the legacy controllers of a mission efficiently to suit a related but different mission, such that multiple desired objects are robustly met, and the solution is obtained in a cost-effective manner.

A fundamental problem in environmental sensing and monitoring is how to identify and demarcate the regions within a large-scale oceanic field where the in-situ measurements exceed a predefined threshold from regions where it does not. Moreover, to deploy effective countermeasures, or to gauge the spread of spatial phenomena, it is necessary to track the dynamically changing boundaries of these regions, as well as their sources/hot spots.  Different algorithms, that require single and/or multiple agents are proposed to address this specific problem.

Lab experiments have been conducted, for e.g. five mobile robots have been used to track a contour of constant luminous intensity in distributed manner (see a sample result from experiments carried out at Mobile Robotics Lab at IISc, Bangalore)

Novel decision making schemes, developed at the University of Exeter, to track hotspots (local maxima) and to determine and track the boundary (level set) of spatial phenomena have been adapted to a wide class of adaptive autonomous ocean sampling problems involving multiple marine autonomous systems (MAS) – in particular the detection and mapping of ocean fronts and detecting the point source of a tracer release in the ocean. The methods to track an ocean front have been tested and validated in a series of desktop experiments based on simulated ocean properties obtained from using the Forecast Ocean Assimilation Model (FOAM) AMM7 system, which is an operational ocean analysis and forecast system run daily at the Met Office, UK.

We have also performed desktop experiments on point source tracer release scenarios. In this case we used simulations from NOC of the DIMES release. The Met Office, UK, provided a forecast model of oceanic features in sea surface temperature (SST) of the North West Atlantic Shelf. The dynamic, turbulence and measurement noise effects are embedded in the forecast data. Information from this large-scale model was used by the University of Exeter as a prior to build a more detailed probabilistic model, which also provided additional information about the uncertainty associated with the SST feature. This detailed probabilistic forecast model was used as the truth for a set of experiments that maximise the amount of information gained about the SST front by optimally manoeuvring the MAS in a fully autonomous mode.

Control and stabilisation of multiple dynamical systems operated over an arbitrary information network has attracted increasing attention from various communities due to its broad range of applications such as cooperative unmanned air vehicles, formation flying of satellite systems, platoons of vehicles, sensor arrays, automated highway systems and multi-agent systems. The research problem associated with such systems is to ensure they operate in agreement i.e., in a synchronised manner, and achieve global stabilisation and performance. 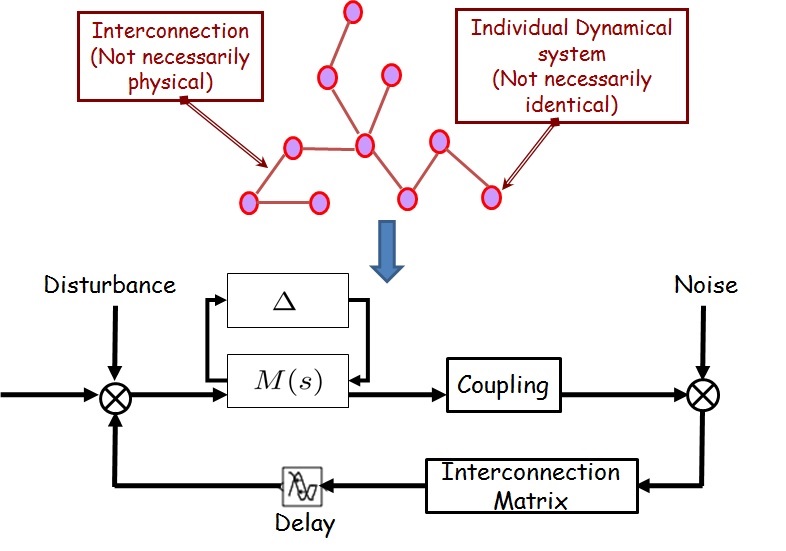 The main objective is to understand and develop novel decentralised and distributed control and estimation techniques for networks of dynamical systems. Focus is to devise control laws with gauranteed performance. In specific, novel decentralized and distributed control laws for networks of dynamical systems which ensures an upper bound on the achievable H2 and L2 performance in the presence of disturbances and time invariant delays are being developed. Mainly uncertain linear systems which has a specific class of nonlinearilty in loop and interconnected  linearly and/or satisfying certain conditions for a specific nonlinear class are considered. Application areas are formation of UAVs, satellites and distributed critical infrastructure networks. Graph theory combined with systems and control ideas have been exploited to obtain novel results. Exploiting the topological properties associated with the dynamic interconnection of the nodes in the network, much of the design problems for large scale complex networks are formulated as solvable convex optimisation problems, which can be solved using existing Linear Matrix Inequalities.

Another specific interest is to study the effect of delays in the relative measurements, while designing the consensus control laws. Use of artificial delays in the measurement feedback are studied. Yet another research interest is to develop effective centralised/semi-decentralised and distributed monitoring schemes for the complex networks. Principles of exisiting nonlinear sliding mode observers are extended to address the monitoring problem associated with the large scale networks of dynamical systems.  Specific focus is on the distributed critical infrastructure networks. Certain graph theoretic properties of the underlying topology of the networks are exploited, and thus the synthesis of observer gains is formulated as a convex optimisation problem with very limited number of design variables (strictly of the order of a single node dynamics).

[iv] Performance Recovery in Presence of Amplitude and Rate Saturation,

Design add-on nonlinear compensators for certain class of legacy controllers to bestow nominal performance in the presence of amplitude saturation in the input signal. The proposed nonlinear antiwindup compensation scheme is implemented and tested on a 1/16 scaled BAe Hawk jet trainer wind-tunnel model, mounted in a one degree of freedom configuration, made available in Department of Aerospace Engineering, University of Bristol. Wind tunnel results demonstrated the usefulness of the antiwindup schemes in preventing performance deterioration due to the input constraints and the flexibility of the proposed approach from a practical perspective. The crisp recovery of linear behaviour is observed.

Recently the methods have been extended for a class of nonlinear systems under partial nonlinear dynamic inversion control. The class of systems under consideration is assumed to be globally quadratically stable, but some of the nonlinear terms are assumed not to belong to the range space of the input distribution matrix. Several anti-windup compensators are devised and applied to a wave energy converter control system, the dynamics of which fall into the class of nonlinear systems. 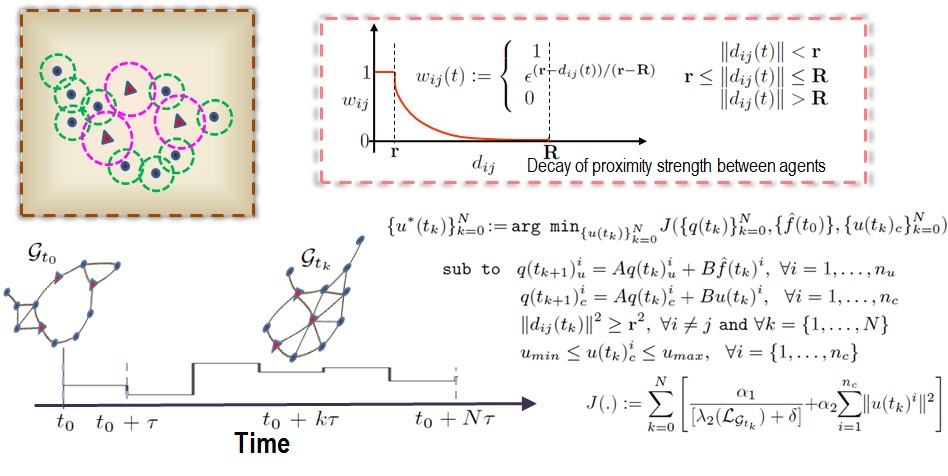 An autonomous`self-organised controlled' multi-agent network, comprising of two classes of agent: primary mission agents and relay agents is developed. The primary mission agents have predefined tasks to execute and operate autonomously within the field of operation. Although these agents operate independently, from a mission planning perspective the base station is required to maintain contact. In order to ensure this, relay agents are employed under the direct command of the base station with the objective of maintaining connectivity. An architecture is proposed to control the relay agents in such a way that connectivity, as measured in terms of the Fiedler eigenvalue, is maximized subject to the cost of moving the relay agents. A model predictive control-like layer is used to generate a set of way-points to position the relay agents at specific places at specific instances of time to maximize connectivity. These way-points are then converted into continuous time paths for the relay agents to follow. Accurate tracking is achieved despite the presence of exogenous disturbance (e.g. wind gusts) and plant model mismatches associated with the RAs.

Main Research Supports are from UKSA, ESA, and UKIERI. 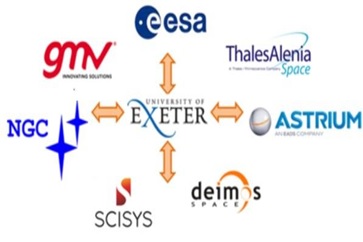