As part of the CADDIES Framework, a two-dimensional cellular automata based model, called Weighted Cellular Automata 2D (WCA2D), and its respective application, called caflood, has been developed. The aim of this model and application is to achieve fast flood modelling for large-scale problems using modern hardware with parallel capabilties.

The WCA2D model adopts simple transition rules rather than the complex Shallow Water Equations to simulate overland flow. Furthermore, the complexity of these transition rules are further streamlined by a weight-based system that reduces the computating cost of using physically based equations and complex mathematical operations.  The WCA2D is a diffusive-like model that ignores the inertia terms and conservation of momentum and it improves the methodology used in the previous CADDIES CA2D model (Ghimire et al., 2013).

The WCA2D model has been designed to work with various general grids, (e.g., rectangular, hexagonal or triangular grid) with different neighbourhood types (e.g., the five cells of the von-Neumann (VN) neighbourhood or the nine cells of the Moore neighbourhood). The major features of this new model are:

More information about the WCA2D model and its predecessor, CA2D, is available in the following references:

The latest version of CADDIES including user manual  and a Powerpoint presentation can be downloaded from the CADDIES downloads section.

There is an advanced version of the caflood application, called cafloodpro, which can be licensed for commercial use and has the following extra features:

The binary resources available are:

If required, it is possible to have different versions of the various applications by contacting Mike Gibson. The alternative options are: run on Linux OS and/or that runs on graphics card GPU using OpenCL, and/or that uses single precision floating point values.

The documents and data resources available are:

The source code resources are available from either doanload below, or from Exeter CADDIES Git respositroy:

The source code of the caflood application and the CAAPI is available under the MIT open-source license. 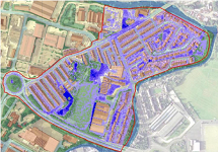 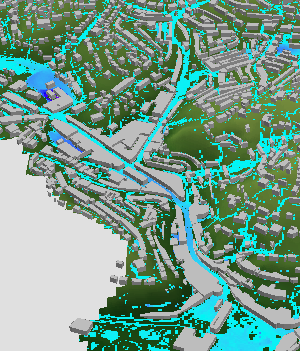