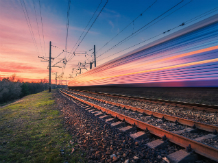 Making the railways safer and more reliable with Ze-Power.

Making the railways safer and more reliable with Ze-Power

In the UK, rail passengers make around 1.7 billion journeys every year, while 400,000 tonnes of freight are transported over the network every day. This shows the extent of dependency of the British people on the railway network. Delays and disruption to the rail network can have a significant impact on the activities of the people who rely heavily on the rail transport and economy of the UK.

Therefore, it is important to ensure the structural integrity of the railway tracks for a smooth running network since failures on railway tracks can be catastrophic, and the unplanned maintenance work required can be very disruptive to the operation of the network. In this case, the capability to detect damage to the track in real time before the defect is able to propagate is highly sought-after.

A partnership comprising the Universities of Exeter and Birmingham are working with Network Rail on the EPSRC-funded project to develop a self-powered, large-area track condition monitoring system for the railways.

Ze-Power, as the title of the project dubbed it, draws zero power from the grid line to do the monitoring. Instead, it will harvest energy from vibration to the tracks caused by trains passing along the line to power itself up and sustain its operation, which is the main benefit of the system.

Currently, people have to be sent out to inspect the railway tracks when there are issues. This could disrupt the schedules of the trains or even put the operators out on the track at risk if there are still trains running on that track due to miscommunication. Alternatively, there are special trains equipped with monitoring technology, but problems can only be detected when they are passing over that particular section of track. Given that the UK has vast railway tracks, it would be more efficient in terms of managing the railway infrastructure and cost effective in the long run if a system were installed permanently on the railway track to do the monitoring.

A monitoring system embedded into the track itself would allow operators to detect faults that occur anywhere on the railway network and take any necessary preventive action or maintenance before the faults become a problem. Since the system does not need mains power for its power supply, it eliminates the cost of installing cables, which is not a small sum given that the UK has 20,000 miles of track.

Ditching the cables can also avoid a single point of failure where a fault in a cable could cause the entire system to stop working. Another popular way of powering devices is to use batteries that have a very limited lifetime or energy capacity. Although battery technology has been vastly improved recently, it is still necessary to have regular battery replacement to keep the system up and running, which can be very costly since it is very laborious to replace every single device on tracks that stretch out such a long way across different terrains and remote areas.

Another problem with both cables and batteries is theft, which can be very costly to prevent and replace as well as disruptive and destructive to the railway infrastructure and services once it’s happened. Therefore, instead of using these conventional means to power the system, a bespoke system will be designed to harvest locally available energy to attain an energy self-sufficient system. Since the system is tailored to the railway tracks, it would have little to no value if it were taken away from the tracks, which would deter people from attempting to steal it.

The EHRG at the University of Exeter chose to use piezoelectric transducers to convert mechanical vibrations on the tracks due to passing trains into electricity to power the system. This allows energy harvesting from tracks almost all the time as long as the tracks are still in use, including in tunnel as well as at night and on dark winters days, which is not possible with the more well-known solar energy. Sophisticated transducer design will be developed to ensure high power generation capability and reliability for long-term deployment of the device.

The system will consist of a number of sensors such as accelerometers, strain gauges, and acoustic emission (AE) sensors to measure different parameters such as track deflection, vibration, and interactions between the rail and train wheels. The sensors will wirelessly transmit the measured data to an operation and management centre, equipped with advanced data processing software designed to detect signs of damage to the track by converting the measurands into a useful piece of information that can be easily understood and interpreted to allow appropriate action to be taken. The Non-Destructive Testing and Condition Monitoring Research Group at the University of Birmingham will lend their expertise in railway track condition monitoring to achieve this goal.

At the moment, most research efforts are focusing on short-range wireless communication sensor networks such as ZigBee and Bluetooth, which only cover a few hundred metres. However, the railway track in many countries is thousands of kilometres long, so the wireless network will need to be able to cover a large area. The High Performance Computing and Networking Group at the University of Exeter will take the lead to ensure the reliability of the network and data transmission over an area as vast as a national rail network while maintaining the low power consumption of the wireless communication.

The research teams will work with divisions from Network Rail: Track Renewals, based in Birmingham; and Infrastructure Projects and Telecom, based in Milton Keynes, to understand their specifications and requirements to develop the bespoke energy harvesting-powered wireless communication sensing technology. The project partners also include Quattro and Swiss Approval.

Once developed, the system will be tested on a stretch of track at Network Rail’s test site.