The Rhenohercynian / Rheic suture, that runs through the English Channel and Western Approaches, and lies immediately offshore of Cornwall, records the last occasion that British continental lithosphere formed part of a convergent plate margin. The suture forms the boundary between the Rhenohercynian and Saxothuringian zones of the Variscan orogen. 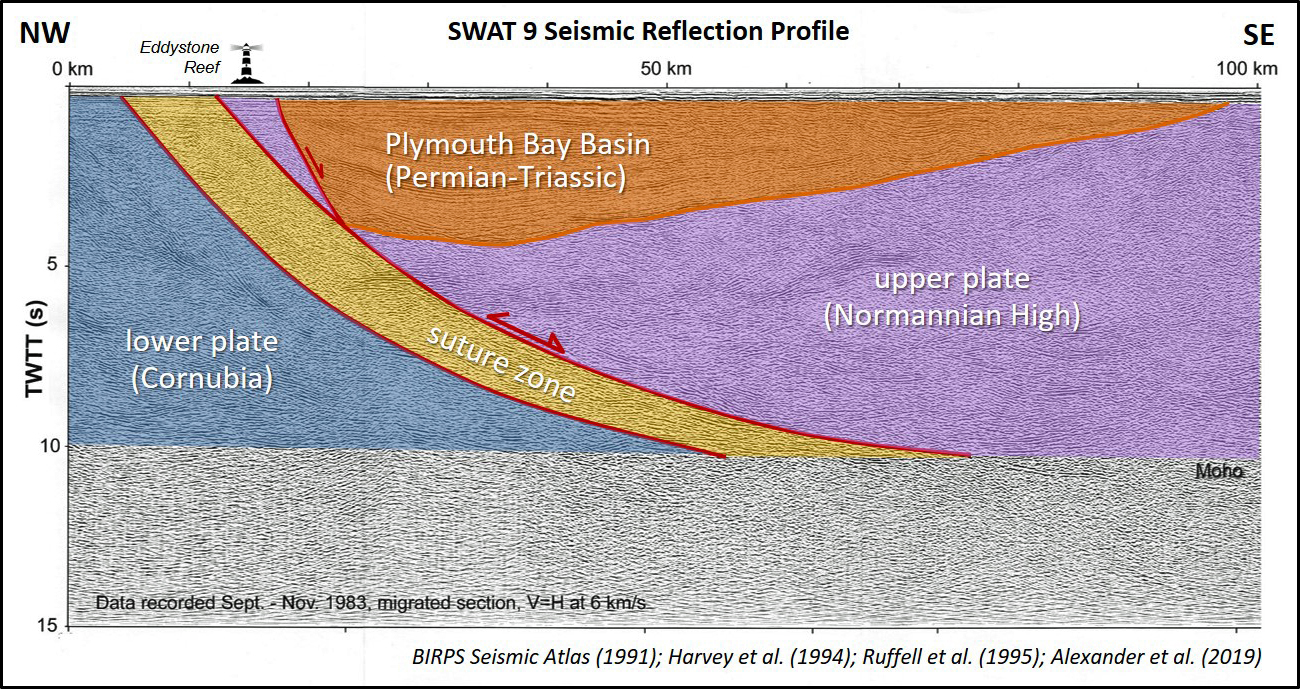 There is no single widely accepted plate tectonic model for the Variscan evolution of this part of western Europe. Some of the admissible possibilities and some of the problems, based on data from SW England and adjacent areas, are outlined in Shail and Leveridge (2009). The Devonian and Carboniferous geology of SW England records the development and subsequent closure of either a: (1) marginal basin immediately north of the Rheic Ocean or (2) successor basin to the Rheic Ocean. Earlier work on the application of sediment provenance models to the tectonic environment of Rhenohercynian sedimentary rocks in Cornwall and Germany is presented in Floyd et al. (1991) and Floyd et al (1990). One of the challenges in tectonic reconstructions is that the nature of pre-Devonian basement in SW England is very poorly constrained. Indirect evidence suggests that it shares some characteristics with the Meguma Terrane in Maritime Canada (Nance et al., 2015). A recent appraisal of the tectonic significance of the suture south of SW England has been provided by Alexander et al. (2019) - see below. 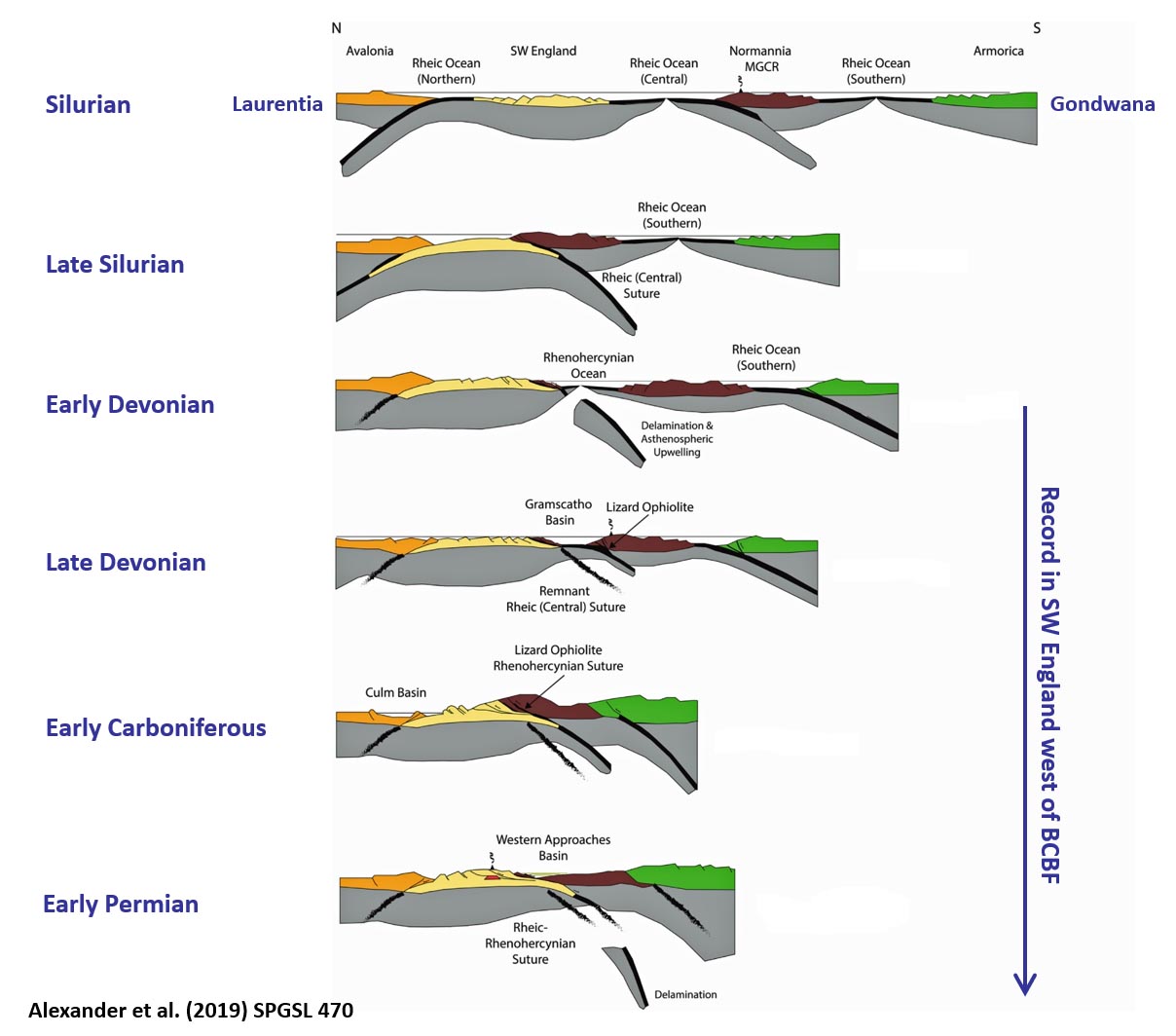 The proximal parts of the northern passive margin (Looe Basin northwards - see Devonian Stratigraphy) are represented by the infill of half / full graben formed by moderate thinning of continental lithosphere; these basins were subsequently strongly inverted during Variscan continental collision. The distal parts of the passive margin (partially accreted together with proximal syn-convergence sediments) are represented by the Gramscatho Basin / Start Complex / Lizard Complex - see below. The distal and proximal segments were juxtaposed along the Start-Perranporth Zone - a major D2 thrust zone; a substantive part of the intervening passive margin may have been occluded. Syn-convergence sedimentation in the later Carboniferous occurs within the Culm Basin and is primarily related to uplift along the frontal segment of the Bristol Channel - Bray Fault as SW England approached and docked with the remainder of southern Britain. Variscan thrust-related covergence had ceased in SW England by c. 305 Ma (late Carboniferous) and briefly replaced by a strike-slip regime before the onset of post-Variscan extension. Descriptions of outcrop-scale structures related to Variscan convergence are provided by Alexander and Shail (1995), Alexander and Shail (1996), Shail and Leveridge, 2009, Hughes et al. (2009) and Alexander et al. (2019). A preliminary evaluation of lineaments across SW England, using Object-Based Image Analysis, which in part reflects the convergence history, has been presented by Yeomans et al. (2018). 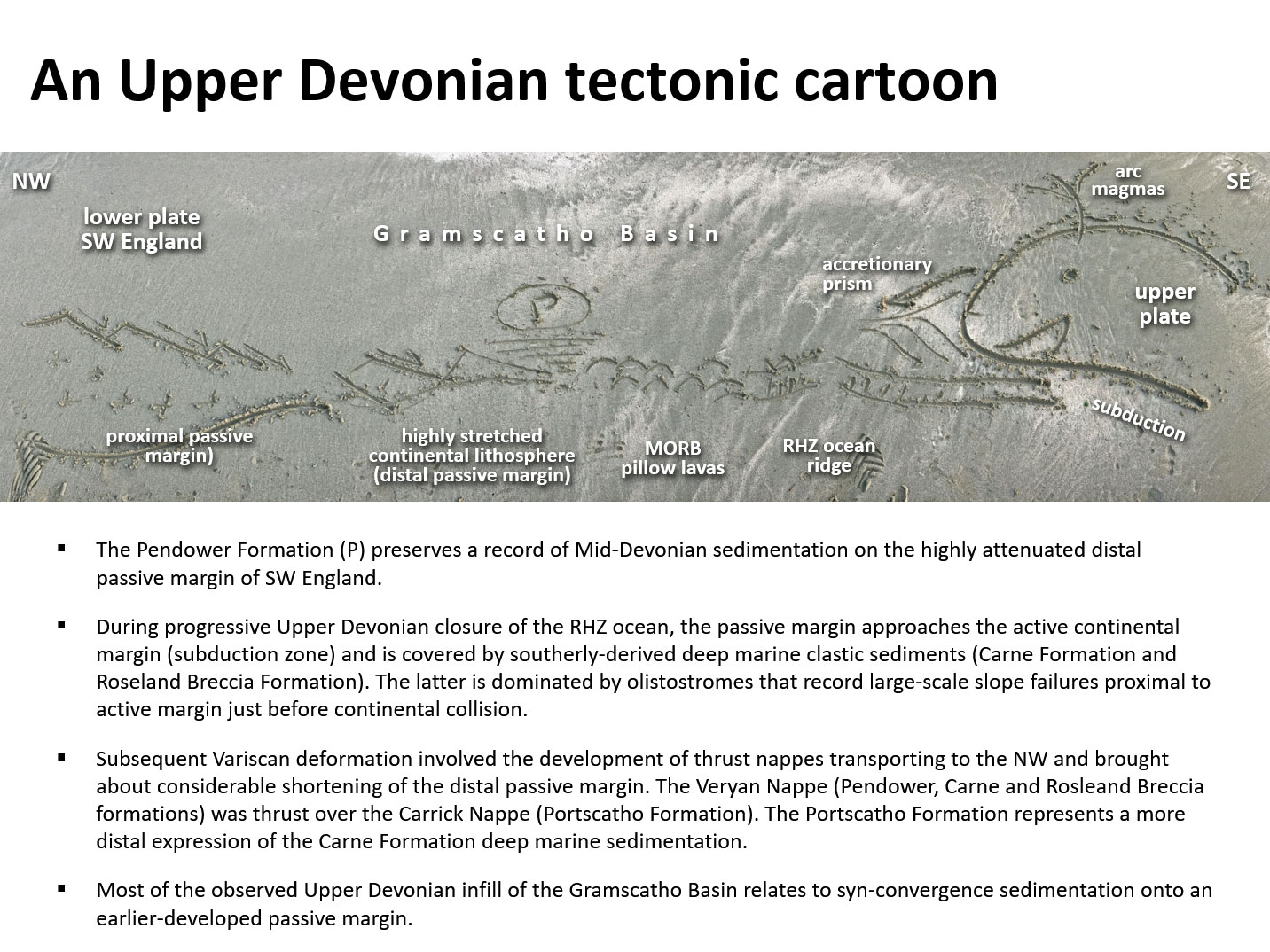