Geology and resources of SW England, Cornwall and the Isles of Scilly

SW England is a superb natural laboratory that, in common with basement massifs across western and central Europe, records the development and destruction of the Variscan mountain belt during the formation of Pangea. My research addresses regional geological evolution and the associated fundamental geological processes, i.e. Variscan / post-Variscan tectonics and its influence on, and interactions between, structural geology, sedimentation, magmatism, mineralisation and landscape development (further details via right-hand sidebar). 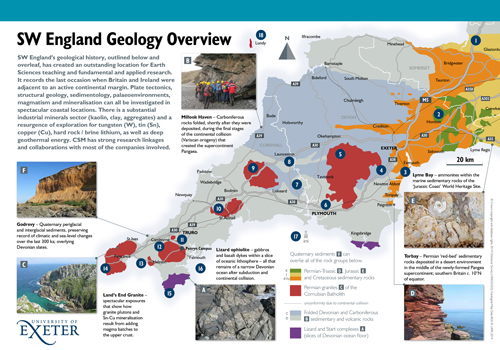 The geological evolution of SW England resulted in an outstanding endowment of natural resources that underpinned a globally significant mining industry for much of the 18th-20th centuries, and world-leading research on 'Hot Dry Rock' geothermal energy in the 1970s-1980s. Since the mid-2000s there has been a resurgence of exploration interest in the UK's most prospective region for the metals tungsten (W), tin (Sn), copper (Cu), lithium (Li) and for deep geothermal energy. The first 'new' metal mine worked the strategically important Hemerdon W-Sn deposit in Devon between 2015-18 and was reposible for the UK becoming the sixth biggest global tungsten producer in 2017. In 2019, the deepest onshore borehole in the UK (5057 m TD) was completed as part of the United Downs Deep Geothermal Power Project and Eden Geothermal Limited received funding to drill a 4500 m deep borehole near St Austell. These are nationally and internationally significant projects.

The applied research that I undertake addresses how fundamental geological processes and regional geological evolution contribute, both positively and negatively, to these resources and their exploration and production (figure below). I've been involved in colloborative research and knowledge transfer with most of the resource companies who have operated in SW England and my NERC-funded research contributes to the ExeterCleanGrowth theme. 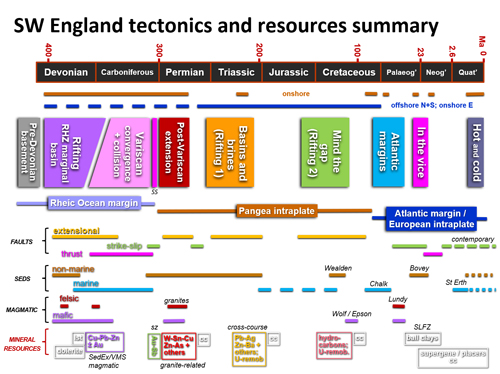