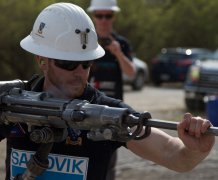 The Camborne School of Mines will compete and host in the forthcoming International Mining Games.

The next generation of miners from across the world are making their final preparations before testing their mettle in a series of gruelling traditional challenges and events.

Thirty-nine teams, including seven teams of intrepid students from the Camborne School of Mines, will compete in skills such as jack leg drilling and hand steeling at the 40th annual International Mining Games.

The prestigious event, which this year is hosted by CSM – based at the University of Exeter’s Penryn Campus, will be held at the King Edward Mine in Troon from 29-31st March 2018.

It is the second time the world-famous mining school has hosted the illustrious event, having previously welcomed some of the world’s best and brightest mining students to Cornwall in 2012.  It also sees the games return to the mining landscape where many of the techniques on show were developed.

Teams from seven countries, including the US and Australia, will pit their skills against each other in seven demanding events that hark back to the industrial heritage of mining, in a bid to be crowned world champions.

Alex Perry, the CSM Mining Games captain said: “We are really excited to be hosting the Mining Games once again here in Cornwall, and can’t wait for the competition to begin. As with all the teams, we have been training hard and are confident we can perform well and secure some medals, and hopefully make the local community and our fellow CSM students proud.

“It promises to be a fantastic few days of competition, and show some of the skills that we learn and hone here at CSM before embarking on our careers. We really hope to see as many people from Cornwall come along and support the team as vocally and enthusiastically as possible. It’s a great opportunity for people of all ages to see an integral part of Cornwall’s heritage brought to life.”

The award ceremony will take place on Sunday 1st April, with overall winning teams being invited to take part in a second ceremony with the Man Engine – the largest mechanical puppet built in the UK. Will Coleman will be presenting the winners of each category at the end of his ‘Afternooner’ event at Heartlands.

Professor Kip Jeffrey, Head of the Camborne School of Mines said: ““We are delighted to be hosts for the 2018 International Mining Games, and to welcome teams from mining schools around the world to Cornwall for this historic mining competition.

“It’s fantastic to see the next generation of men and women, who will be the lifeblood of the global mining industry in the future, demonstrating their practical mining skills in a spirit of good natured but keenly- felt rivalry.  I wish all the teams well and look forward to an excellent International Mining Games, full of spectacle and skill.”

The International Mining Games were first held in 1978 in honour of miners killed after fire broke out at the Sunshine mine near Kellogg, Idaho, USA, as well as all miners who have perished in the line of duty.  The competition seeks to keep the old-fashioned mining techniques alive, as well as strengthen the camaraderie of the mining students of today.

The seven events that make up the Games are:

The event is open to the public, with all welcome to attend.

The games would not happen if not for the generosity of industrial sponsorship. The funds cover the costs of the entire event and allow teams to travel to the host Mining School. This year the sponsors are:

In the week leading up to the Games, the Camborne School of Mines will also hold the inaugural Cornwall School Mining Games, where teams from local schools will compete in a range of activities inspired by the International competition.

Held on Monday 26th March, and also at the King Edward Mine, 8 teams of 12-13 year old students will learn about mining heritage in Cornwall, while engaging in a number of hands on events from Hand Steeling to Track Laying.