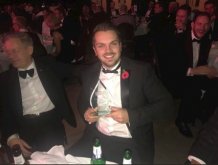 Kieran with his award

Camborne School of Mines graduate Kieran Lean (BEng Mining Engineering 2016) was given the award at the CIBSE North East and Yorkshire awards in November, in recognition of his outstanding work and professional development in his role as Building Services Management Trainee with Wates Construction.

Kieran was nominated for the award by Wates’ Operation Director, and was named as ‘Highly Commended’ after coming came a close runner up to the winner by only two points. Kieran is one of the first professionals to win a building services related award for Wates construction. He said “I was very proud to have been nominated and ultimately rewarded with the trophy. The award will no doubt help in future endeavours. It is now going to be on my CV forever and will help me to always stand out in the work place. Being involved in this award and ultimately CIBSE as a whole is also a fantastic way to network and meet people from other disciplines within the industry.”

Kieran’s role with Wates Construction involves the management of all mechanical, electrical and plumbing installations on a number of different construction sites. This consists of technical assistance at design stage right the way through procurement, sub-contractor management and final handover.

Speaking of his experience studying at Camborne School of Mines, Kieran commented: “The programme has helped provide me with a recognised degree that is accredited not only with mining bodies but also most other engineering bodies. This allowed me to quickly begin my progression to becoming a chartered engineer. Within the next 10 years I aim to have progressed my career into a senior management role within the company. My aim is to have worked my way up into an MEP Construction Managers role with a view to ultimately achieving a role as an Operations Director.

“I feel that by gaining my engineering degree from CSM the job prospects are limitless. I have had the opportunity to work for British Gypsum in the mining sector, Petrofac in the oil and gas sector and now Wates within the construction sector. The modules taught and the skills gained, along with plenty of drive and determination mean the world really is your oyster!”