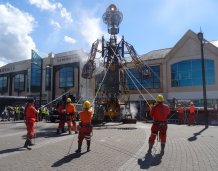 The Man Engine has travelled over 130 miles.

An eleven metre tall mechanical puppet has been named as the best arts project in the UK, following a campaign supported by the University of Exeter’s Camborne School of Mines.

The Man Engine project is a vast puppet of a tin miner which 'walked' the length of Cornwall and beyond – in total travelling over 130 miles. The journey marked the tenth anniversary of the Cornwall and West Devon Mining Landscape becoming a UNESCO World Heritage site.

On Monday 4th September, the team behind the Man Engine was surprised to meet comedian David Baddiel, who unzipped his boiler suit to reveal a white T-shirt with the slogan 'You Have Won'. The Man Engine had been voted by the public to be the UK’s best arts project in the National Lottery Awards. The Man Engine won among stiff competition – 1300 projects were nominated to win.

David Baddiel spoke after presenting the team with their award: “The Man Engine is extraordinary. As well as being a mechanical wonder which people have flocked to see, it’s become a symbol of Cornwall’s pride and heritage. They fully deserve this award – National Lottery players should be very proud to have helped fund the Man Engine.”

Will Coleman, Director of Golden Tree Productions, the team behind the Man Engine, added: “We are delighted to have won a National Lottery Award and to be recognised in this way by the public, not just in Cornwall but throughout the UK.

“I’d like to thank everyone who voted for us and everyone who plays the National Lottery for enabling us to awaken the Man Engine and share him with so many.”

The Man Engine will go on to tour South Wales and the North of England in the coming year.