Prof. Keedwell has published one book 'Intelligent Bioinformatics' and over 120 papers in journals and conferences in the fields of computer science, bioinformatics and hydroinformatics.  Details of these are available on the publications page.  Further details are also available on Google Scholar and Researchgate

Prof. Keedwell has successfully applied for projects worth over £2m in total.  This funding has predominantly been provided by the EPSRC, with projects also funded by Innovate UK (was the Technology Strategy Board) and by industry.

This EPSRC funded project is investigating the use of a modern nature-inspired optimisation technique known as ant colony optimisation to discover associations between groups of small changes in DNA and a variety of diseases including type I and type II diabetes, inflammatory bowel disease and rheumatoid arthritis.  The developed techniques are designed to search the billions of combinations of small changes in DNA over populations of thousands of people to determine those that might lead to a greater susceptability to disease.
In many cases, it is not possible to search every combination, even with very powerful computers and so this project is using one of a family of stochastic optimisation algorithms to perform this task.  You can read more about the biology and computer science of this project, as well as read about the progress we are making in the sections below.

The first ACO algorithm, proposed by Marco Dorigo in 1996 [1] was Ant System and since then a number of modifications have been proposed to improve performance of the algorithm.  ACO is inspired by the way that populations of ants in nature can find a short path between the nest and a food source by sensing the pheromone trails of previous ants. The computational algorithm requires ants to traverse a topology which is either a direct representation of the problem (e.g. in the travelling salesman problem) or a landscape of variable choices known as a construction graph. We have adapted the algorithm to work with the specific challenges of Genome-Wide Association Studies.

Standard ACO works by laying pheromone on the links between variables choices, which works well for combinatorial problems.  However, for subset based problems (i.e. selecting a small number of N from a larger set), this method does not work well and incurs high computational complexity.  We have therefore made use of a method first proposed by Leguizamon and Michaelawicz (1999) [2] which lays pheromone on the variables (SNPs) themselves rather than the links between them, reducing the search space considerably and speeding execution.

Standard ACO path selection works by constructing a roulette wheel of variable choices for the ants to consider, weighted by the pheromone (and possibly a local heuristic) on each choice. This works well for a wide range of problems, but the specifics of GWAS mean that such a roulette wheel would require ~400,000 such segments, leading to poor path selection pressure and large computational loads. To counter this, we developed a tournament-based ACO algorithm [3] that chooses paths by randomly selecting N SNPs and choosing the SNP with the best pheromone value for the ant to explore. Experimentation has shown the effectiveness of this method on high-dimensional problems and improved execution times for reasonable N. 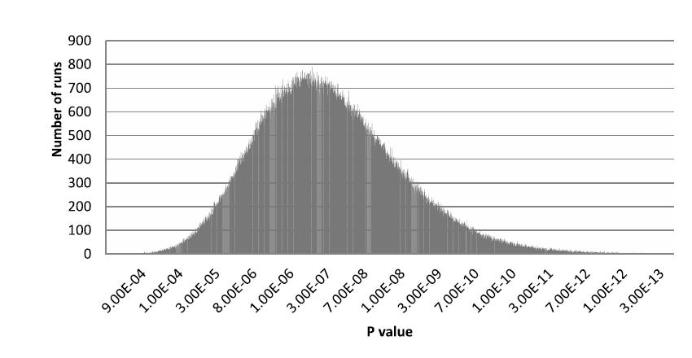 We have applied the above methods to data from the Wellcome Trust Case Control Consortium involving a number of different diseases. The datasets consist of around 400,000 SNPs and over 5000 individuals (~3000 controls, ~2000 cases) that must be explored by the ACO approaches. The size of this dataset has presented some challenges from a computational perspective and the flexibility of the ACO approach is such that we have been able to explore interesting relationships between SNPs.  These are presented in more detail below:

With between 400,000 and 500,000 SNPs and 5000 individuals, storing the datasets in working memory became a problem. Using a single byte for each SNP would require between 2 and 2.5 GB of free space in RAM which can result in the OS paging to disk even with 4 GB or more of memory. We have therefore developed a compression technique that allows 4 SNPs to be stored in a single byte that reduces runtimes and allows for multiple runs to be made in parallel on the same machine if required [4].

The traditional view of gene-gene interactions is that they operate with an AND operation, for instance - SNP1=GENOTYPE X AND  SNP2=GENOTYPE Y is commonly used. We have explored some of the relationships that might exist between SNPs that are not represented by this AND operation, and have included OR, XOR and NOT to provide the algorithm more flexibility in the way in which it allows SNPs to interact [5].  Results have shown that these additional operations provide additional power to the algorithm to find statistically important associations in the data.

A key issue with developing these methods is the correction for multiple testing. With single associations, it is relatively simple to correct p-values using Bonferroni correction, but a stochastic algorithm discovering gene-gene interactions is more difficult. We have used monte-carlo methods to select 1,000,000 random combinations from the data and have also run the algorithm thousands of time on shuffled data to determine the statistical significance of results.

This ongoing EPSRC project has yielded interesting developments in ACO, the representation of data and significance testing and has shown promise in discovering gene-gene interactions in large-scale GWAS data.

This EPSRC-funded project is investigating the use of sequence analysis techniques taken from bioinformatics in the development of hyperheuristics.  Hyper-heuristics are optimisation approaches that operate at the level above traditional metaheuristics (e.g. evolutionary algorithms) and must either select from a pre-defined set of low level heuristics (e.g. mutation, crossover and hillclimbing operators) or generate them.  The focus in the SEQAH project is on developing selection hyperheuristics by analysing and creating sequences of heuristic usage during an optimisation.  The first method developed in this project is known as SSHH and uses a hidden markov model to analyse and produce sequences of heuristics.

SSHH uses a hidden markov model where hidden states are replaced with low level heuristics (LLH) and a matrix of transition probabilities determine the movement between these states.  A further set of emission probabilities determine whether, given a particular LLH selection, the heuristic will be applied or will be coupled with another LLH to form a sequence.  The method can be seen in the diagram below and more detail can be found in this paper (best paper nominee, GECCO 2015). 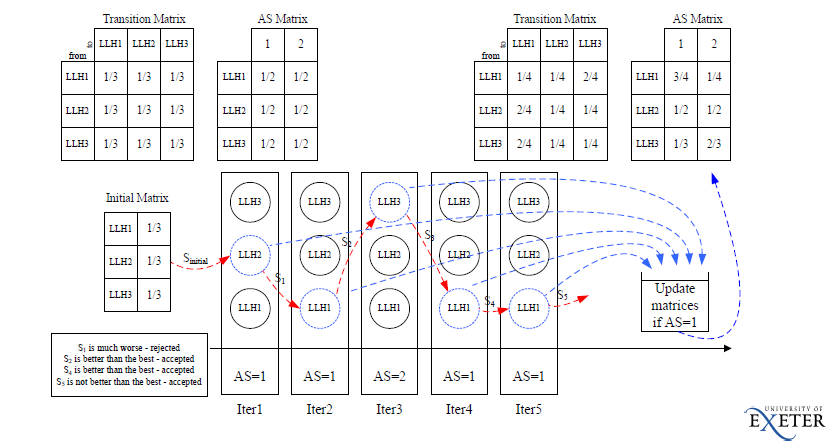 In this project, we are investigating new hyperheuristics for continuous & mixed encoding multi-objective problems and are applying them to problems in the water industry, including the mitigation of discolouration risk.  The project is supported by EPSRC and consultants Mouchel Ltd.

Heuristics evolved for solving multi-objective water distribution network problems with discolouration risk taken from the pareto-front of operations.  The probability distributions show the probability of mutation around the current point and the point clouds demonstrate the resulting behaviours in optimisation space.