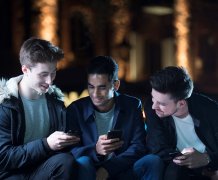 A new ‘app’to help party-goers beat long queues for nightclubs has been developed by Exeter students.

A new ‘app’to help party-goers beat long queues for nightclubs has been developed by clubbing students at the University of Exeter.

The queue tracker (QTRKR) mobile friendly website, which operates like an app, has been successfully trialled with 1,500 clubbers who have used it to plan their nights out. The ‘app’ gives real-time updates on waiting times, and shows them which clubs have the shortest queues.

A free app version of the mobile-friendly website for iphones and android phones is now being developed with plans to roll it out to cities nationwide.

The QTRKR  site was invented by Shaan Mangat, a student at the University of Exeter from North London who is a keen club goer, with his two housemates who study computer science, Mark Berrow and Rhys Bennett. The three students developed it on their kitchen table with funding and advice from the University of Exeter’s scheme to support student startups.

Shaan hopes QTRKR will reduce any antisocial behaviour that might break out in long, unpleasant club queues.  Club owners say it has helped reduce crowding.

Brian Philips, who runs Move nightclub in Exeter said:  “Since we’ve been using the app, it staggers when people come to us, so that helps our security get people into the club in a more organised fashion. It’s also very beneficial when we are quiet, as we can advertise no queues and an influx of people will come down.”

The app successfully trialled in Exeter with 8 nightclubs in the summer, and was used by 700 people – mainly students at the University of Exeter - in just two weeks. A further 800 students used in during Freshers’s week, at the beginning of the University term.

Before QTRKR, clubbers would set out to clubs without knowing how long they would have to wait or whether they can get in at all. The app solves this by listing live waiting times at participating clubs.

Shaan, age 20, who is studying politics, economics and philosophy,  inspired to create the app after noticing that clubbers were resorting to ringing taxis and checking on social media to check which nightclubs had the longest queues.

“During my first year at university I saw students calling up friends in queues, making posts on social media and even ringing taxi companies for information on queues,” said Shaan. “I saw that students were really keen for this information, so we tried to help them by working with nightclubs to give them real time information about how long they’d have to wait.”

QTRKR uses regular updates from staff in clubs on the length of their queue. When a staff member updates QTRKR, their venue is automatically listed first on the website. A club which hasn’t updated at all in the past two hours is bumped down to the bottom of the list automatically, so it is less likely to be seen by users.

Shaan hopes the app will also reduce any antisocial behaviour that might break out in long, unpleasant club queues. His work has received funding from the University of Exeter’s Think:Try:Do scheme for student start-ups, and support from the Home Office-funded Best Bar None scheme.

The website operates like an app on mobile phones, and an app downloadable on iphones and ipads and android devices is now being developed. It is being supported and tested by adviser Mark Fincham.

With plans to expand to other parts of the UK this year, Mangat wants to diversify the app so it can be used at theatres with limited tickets, for live music events, even for the queues to get into football stadiums.

A film of a night out in Exeter, with the app in operation can be seen here.