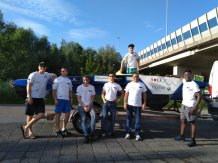 A team of intrepid students from the University of Exeter has been making waves at a special, pan-European eco-racing competition.

A six-strong team of students from the Penryn Campus, near Falmouth successfully competed in the Solar Sport One competition, held in Pumerend, in the Netherlands.

The completion sees solar-powered boats, or various shapes and sizes, participate in a series of events designed to test their durability, speed and power.

The team, called SoleX and which was supported by the University of Exeter's Annual Fund as well as sponsorship from 4C Architecture Ltd, Midsummer Energy and Plug Life Television enjoyed considerable success at the event.

Not only did the boat complete 38km in the endurance race but it also reached speeds of up to 17 km/h in the racing section, finishing fourth overall in the V20-class of competition.

Dr Justin Hinshelwood, Senior Lecturer in Renewable Energy at the University of Exeter and who helped coordinate the team, praised the students for their “hard-work, dedication and success”.

He said: “This was our first time entering the competition, and the students has to work tremendously hard to ensure SoleX was fit and ready to compete.

“There are quite stringent safety checks before they are allowed into the competition, and to pass those and take to the water was a wonderful achievement.”

The Cornwall team were made up from undergraduate and postgraduate Renewable Energy students from the UK, China, Ecuador, Nigeria and South Arica.

As it was the first year competing, the team used a basic boat kit supplied by the organisers, before remodelling and developing a number of different parts.

Dr Senthil Sundaram, a Renewable Energy Lecturer and who also helped organise the team added: “Renewable based electricity is so important in the carbon saving which could help the global warming issues.

“It is absolutely necessary to focus on sustainable future transports through renewable electricity, solar boat is one such and a great step forward by the UoE Renewable energy team”

Nicholas Skeen, an MSc Renewable Energy Engineering student and part of the team added: “The Solar Boat is an extra-curricular project giving us an opportunity to work on something much larger than our standard coursework projects.

“We get to work with high power systems, apply the knowledge we have gained in class and learn how a real engineering project gets done in terms of budgeting and sticking to timelines.

“To have the opportunity to travel to the Netherlands and compete in the Solar Sport One solar boat competition was fantastic. We met so many like-minded engineers and also had a chance to collaborate on ideas for next year’s race.”