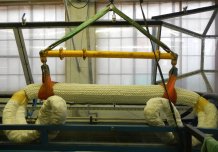 The University of Exeter has carried out performance and durability tests on a set of elastometric mooring tethers as part of the H2020-funded OPERA wave energy project.

The tests were carried out at the University of Exeter’s Dynamic Marine Component (DMaC) test facility to determine the effect of scaling on tether performance.

The work has been carried out in parallel with data collection from the floating oscillating water column wave energy converter ‘Marmok-A-5’ developed by Oceantec Energías Marinas. Deployed at the BiMEP test site in October 2016, measurements from the site include environmental conditions, device motions and mooring tensions.

In conjunction with Lankhorst Ropes, the DMaC tests will enable the design of the two 70m long tethers, which will be used on the OPERA project. The tethers will be deployed during this summer (2017) for a 12 month period, replacing two conventional polyester ropes in the ‘Karratu’ mooring system. Previous tests involving the tether design demonstrated that elastomeric tethers can reduce mooring peak loads. The purpose of the second deployment will be to demonstrate that elastomeric mooring components can address cost and durability challenges for marine renewable energy moorings.

OPERA is an international project consortium, coordinated by TECNALIA, comprising 12 academic and industrial partners. The project aims to develop and de-risk technologies that will reduce the cost of operating wave energy devices at sea by 50% and subsequently accelerate the roll out of marine renewable energy.