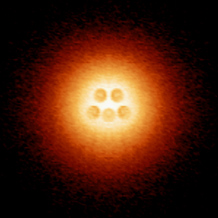 An artificial atomic nucleus made up of five charged calcium dimers is centred in an atomic-collapse electron cloud.

The first experimental observation of a phenomenon in quantum mechanics that was predicted nearly 70 years ago holds important implications for the future of graphene-based electronic devices.

Working with microscopic artificial atomic nuclei fabricated on graphene, researchers from the University of Exeter, the Berkeley Lab, the University of California (UC) Berkeley, UC Riverside and the Massachusetts Institute of Technology (MIT) have imaged the atomic collapse states predicted to occur around super-large atomic nuclei.

The research, published in the journal Science, combined both experimental and theoretical work. The theoretical calculations were performed by Dr Andrey Shytov at the University of Exeter. This, along with a computer simulation performed at Berkeley, confirmed that the theoretical modelling of atomic collapse is fully consistent with the observed experimental data.

Originating from the ideas of quantum mechanics pioneer Paul Dirac, atomic collapse theory holds that when the positive electrical charge of a super-heavy atomic nucleus surpasses a critical threshold, the resulting strong Coulomb field causes a negatively charged electron to populate a state where the electron spirals down to the nucleus and then spirals away again, emitting a positron (a positively–charged electron) in the process. This highly unusual electronic state is a significant departure from what happens in a typical atom, where electrons occupy stable circular orbits around the nucleus.

“Atomic collapse is one of the holy grails of graphene research, as well as a holy grail of atomic and nuclear physics,” says Michael Crommie, a physicist who holds joint appointments with Berkeley Lab and UC Berkeley. “While this work represents a very nice confirmation of basic relativistic quantum mechanics predictions made many decades ago, it is also highly relevant for future nanoscale devices where electrical charge is concentrated into very small areas.”

Nuclear physicists have tried to observe atomic collapse for many decades, but they never unambiguously saw the effect because it is so hard to make and maintain the necessary super-large nuclei. Graphene offers the opportunity to see a condensed matter analogue of this behaviour, since the extraordinary relativistic nature of electrons in graphene yields a much smaller nuclear charge threshold for creating the special supercritical nuclei that will exhibit atomic collapse behaviour.

Perhaps no other material is currently generating as much excitement for new electronic technologies as graphene, sheets of pure carbon just one atom thick through which electrons can freely race 100 times faster than they move through silicon. Electrons moving through graphene’s two-dimensional layer of carbon atoms, which are arranged in a hexagonally patterned honeycomb lattice, perfectly mimic the behaviour of highly relativistic charged particles with no mass. Superthin, superstrong, superflexible, and superfast as an electrical conductor, graphene has been touted as a potential wonder material for a host of electronic applications, starting with ultrafast transistors.