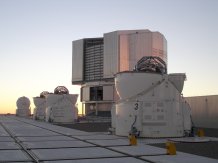 The University of Exeter is joining Europe’s largest, ground-based astronomy collaborative network, it has been announced.

The new OPTICON-RadioNet PILOT (ORP) network is the amalgamation of two major, pan-European collaborative networks - OPTICON which coordinates efforts in ground-based optical astronomy and RadioNet, which specialises in radio-wave astronomy.

The new network, launched with €15 million of funding under the H2020 programme, aims to harmonise observational methods and tools, and provide access to a wider range of astronomy facilities.

As well as providing scientists with access to a wide range of instruments, it will also promote training for young astronomers, and open the way to new discoveries.

As part of the pioneering network, the University of Exeter will run the UK’s VLTI Expertise Centre.

The United Kingdom centre builds on long-standing experience in the astrophysical exploitation of the VLTI instruments GRAVITY, MATISSE, AMBER, MIDI, and PIONIER.

The VLTI Expertise Centre has a number of strategic aims, including promoting collaboration between interferometrists worldwide and the coordination of cross-facility observations with the US interferometers.

Professor Stefan Kraus, Exeter’s project coordinator and a leading expert in Astrophysics said: “The VLTI offer a very innovative way for studying the sky. I am excited that the ORP will allow us to support other scientists in using this technique.”

As our knowledge of the Universe advances, astronomers increasingly need a range of complementary techniques in order to analyse and understand astronomical phenomena.

The new ORP network, which brings together some twenty telescopes and telescope arrays, is designed to harmonise observational methods and tools for ground-based optical and radio astronomy instruments.

The ORP will, in particular, foster the development of the booming field of what is known as time-domain astronomy, which aims to learn about the processes in the interior or surrounding of astronomical objects by studying how these astronomical objects change with time.

“We often think of the sky as constant and never changing. This is often not true anymore at the extreme resolution of VLTI, where we probe the immediate surroundings around stars, planets, or black holes. On these scales, the Universe in always in motion, which makes this technique particularly interesting for studying variable astronomical objects.”, says Professor Kraus.

The ORP program will work on removing barriers between communities by harmonising observation protocols and analysis methods in the optical, infrared, and radio domains and enable astronomers to work better together to observe such events.

Astronomers from 15 European countries, Australia and South Africa, as well as from 37 institutions, have already joined the ORP consortium. It will be coordinated by the CNRS, which runs and contributes to several optical and radio telescopes.

This project has received funding from the European Union’s Horizon 2020 research and innovation programme under grant agreement No 101004719.