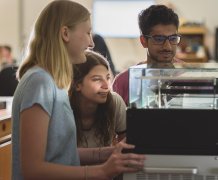 Physics and Astronomy has been named a champion of gender equality.

The Department of Physics and Astronomy at the University of Exeter has been named a champion of gender equality as part of the Institute of Physics' Project Juno initiative.

Project Juno aims to address the long-standing issue of women being under-represented in physics at UK and Irish universities by recognising and rewarding actions to address the issue and embed better working practices for all.

The department joins 18 others in the UK and Ireland that have attained Champion status, having already been awarded Juno Practitioner status in 2013, which was renewed in 2015.

Professor Nick Stone, Head of Exeter’s Department of Physics and Astronomy, said: I am delighted that we have been awarded Juno Champion status. It is great that the Department is recognised for all the hard work towards improving the equality and diversity of our culture.

“The IOP Juno Team has been incredibly supportive and encouraging. This has really helped give us the confidence to follow the actions we identified as important within our department.”

To become a Juno Champion, a department, institute or group must demonstrate that it has embedded the five principles of Project Juno. These concern appointment and selection, career promotion and progression, departmental culture, work allocation, and flexible working practices. There must also be a framework in place to deliver equality of opportunity and reward.

Professor Ken Evans, Pro-Vice-Chancellor and Executive Dean of the College of Engineering, Mathematics and Physical Sciences said: “We are extremely pleased to have been awarded Juno Champion status. The ethos of Project Juno echoes those found at the heart of both the College and the wider University, to provide a welcoming and supportive environment for everyone to thrive.

This award is a testament to the dedicated work carried out within the Physics department to ensure everyone has the very best opportunity to succeed in the workplace, in their studies, and future careers.”

Jennifer Dyer, Head of Diversity at the Institute of Physics, said: “I'm delighted that Exeter physics and astronomy has joined the growing list of Juno Champions. Project Juno supports physics departments to embed equality and the department, in particular the head Professor Nick Stone, has demonstrated that the Juno principles have been incorporated at all levels.”