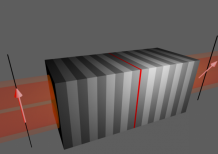 This is a pivotal breakthrough in the quest to control light to evolve the next generation of quantum sensing and computing.

Scientists have made a pivotal new breakthrough in the quest to control light to evolve the next generation of quantum sensing and computing.

The team of researchers, including Dr Oleksandr Kyriienko from the University of Exeter, has shown that controlling light can be achieved by inducing and measuring a nonlinear phase shift down to a single polariton level.

Polaritons are hybrid particles that combine properties of light and matter. They arise in optical structures at strong light-matter coupling, where photons hybridize with underlying particles in the materials – quantum well excitons (bound electron-hole pairs).

The new research, led by experimental group of Prof D Krizhanovskii from the University of Sheffield, has observed that an interaction between polaritons in micropillars leads to a cross-phase-modulation between modes of different polarization.

The change of phase is significant even in the presence of (on average) a single polariton, and can be further increased in structures with stronger confinement of light. This brings an opportunity for quantum polaritonic effects that can be used for quantum sensing and computing.

The research is published by Nature Photonics.

Dr Kyriienko said: “The experimental results reveal that quantum effects at single polariton level can be measured in a single micropillar. From the theory point of view, it is important to increase phase shifts and develop the system into an optical controlled phase gate. We will definitely see more efforts to build quantum polaritonic lattices as a quantum technology platform.”

Polaritons have proven to be an excellent platform for nonlinear optics, where particles enjoy increased coherence due to cavity field and strong nonlinear from exciton-exciton scattering.

Previously, polaritonic experiments led to observation of polaritonic Bose-Einstein condensation and various macroscopic nonlinear effects, including formation of solitons and vortices. However, the observation of quantum polaritonic effects in the low occupation limit remains an uncharted field.

The study shows that polaritons can sustain nonlinearity and coherence at extremely small occupations. This triggers a search for polaritonic systems that can further enhance quantum effects and operate as quantum devices.

Dr Paul Walker, the corresponding author of the study, explains: “We have used high quality micropillars from gallium arsenide provided by collaborators from University of Paris Saclay, France. These pillars confine modes of different polarization that are close in energy. By pumping light into one of the modes (fundamental), we probe a signal sent into another (higher energy) mode, and observe that the presence of weak (single photon) pulse leads to polarization rotation. This can be seen as a controlled phase rotation.”

The senior author for the study Prof Krizhanovskii concludes: “In the presented experiment we have made a first step to see single-polariton effects. There is certainly a room for improvement. In fact, using cavities of smaller size and optimizing the structure we expect to increase phase shift orders of magnitude. This will establish the state-of-the-art for future polaritonic chips.”