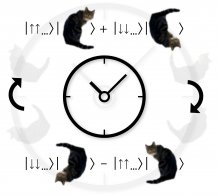 The quest to develop the understanding for time crystalline behaviour in quantum systems has taken a new, exciting twist.

Physics experts from the Universities of Exeter, Iceland, and ITMO University in St. Petersburg, have revealed that the existence of genuine time crystals for closed quantum systems is possible.

Different from other studies which to date considered non-equilibrium open quantum systems, where the presence of drive induces time-periodic oscillations, researchers have theoretically found a quantum system where time correlations survive for an infinitely long time.

Published in Physical Review Letters as Editors’ Suggestion on November 20th, the study could pave the way to the development of novel, exciting applications, such as a new kind of atomic clocks.

The notion of a time crystal (TC) was first put forward by the esteemed physics Nobel laureate Frank Wilczek in 2012. The central role in establishing time crystal as a new phase of matter corresponds to breaking of the time translational symmetry.

In everyday life we are surrounded by solids, where atoms and molecules form a periodic structure along the spatial coordinates.

Unlike ordinary crystals – such as diamonds – with properties defined by atoms being regularly arranged in space, time crystals instead show an ever-changing mode of behaviour that repeats in time.

However, the very possibility of time-translational symmetry breaking turned out to be notoriously difficult in a perfectly isolated quantum system which remains in equilibrium. Notably, the theorem proven by Haruki Watanabe and Masaki Oshikawa stated that quantum version of time crystals are impossible, unless: 1) highly non-local interactions are present in a genuine quantum system; or 2) a driven system is considered.

In particular, using the second loophole, scientists have shown in recent years that different time crystals variants (most notably discrete or Floquet time crystals) are possible to produce.

The question: “Can the original concept of time crystal be realised?” thus remained in the air.

In the new study, the research team led by Oleksandr Kyriienko from the University of Exeter has shown that it is possible to ‘bypass’ the no-go theorem for the existence of quantum time crystals, and that the genuine time crystalline order is indeed possible.

The key ingredient corresponds to finding the Hamiltonian – an operator which describes the energy of a quantum system – which fully satisfies the conditions for TC behaviour posed by Watanabe and Oshikawa.

The team has found that the system which breaks the time-translational symmetry necessarily possesses multiparticle interactions (so called “strings”) where at least half of particles interact simultaneously.

The findings could help further scientist’s understanding of how condensed states of matter behave, and shed the light on physics of dynamical orders.

Being the first step towards breaking the continuous time-translational symmetry, the study attracts attention to other possible quantum systems where long-range interactions may induce non-trivial dynamics.

Oleksandr Kyriienko said: “Now we know that time translational symmetry can be broken with highly nonlocal interactions. Can we improve on that and have practically useful systems with reduced interactions where correlations survive at infinite times? I don’t know for sure, but am eager to find out.”