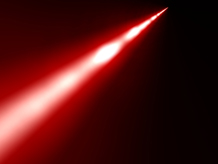 The laser technique allows tissue to be analysed deep beneath the surface, without being cut open.

A technique that could take away the anxious wait by patients for breast cancer results by removing the need for a needle biopsy is to have its performance evaluated for the first time, on breast tissue and lymph nodes. The method originally invented at STFC’s Central Laser Facility has already been proven as a viable option for detecting abnormalities picked up by mammograms but has not yet been tested on human breast tissue ex vivo.

A grant awarded to the University of Exeter and STFC in partnership with the Gloucestershire Hospitals NHS Foundation Trust by the Engineering and Physical Sciences Research Council today (7 March 2013) will make this possible.

The laser technique known as Spatially Offset Raman Spectroscopy (SORS) allows non-see-through objects such as tissue to be analysed deep beneath their surface, without them being cut open. The technique is already being used in security scanners to detect liquid explosives and at the end of last year, PhD student Marleen Kerssens - funded by STFC’s Biomedical Network and the Gloucestershire Hospitals NHS Foundation Trust – proved through tests on pork, that the same concept could be used to detect if shadows picked up on mammograms are benign or malignant. The new grant will allow the team of researchers to optimise the sensitivity and penetration depth of the technique further and, for the first time, evaluate its performance on human breast tissue that has been removed during operations (excised tissue) and put forward by consenting patients for use in research.

While still in a very early stage of research, it is hoped the technique could ultimately lead to an instant diagnosis for breast cancer at the time of a mammogram. Currently when a mammogram picks up abnormalities, a follow up needle biopsy is required, meaning an extra trip to the hospital for patients, associated anxiety to the patient and further cost to healthcare providers. 70-90 percent of the needle tests come back negative but not before a nervous wait by patients for the results.

Professor Nicholas Stone the project’s Principal Investigator from Physics at the University of Exeter, said: “This technique, if applied at mammography could have a huge impact on those 75,000 patients a year in the UK having to return for additional biopsies, with associated anxiety, when they are found to have nothing wrong”.

Marleen Kerssens who proved that the technique could be used to detect if a cancer is malignant or benign has now finished her PhD but she said: ''I am really pleased this line of research can be continued with the support of ESPRC. It is an exciting field of research and translation of the SORS technique to a clinical setting has the potential to reduce the amount of false positives and therefore reducing patient anxiety.”

When the SORS method is applied, signatures obtained as the light from the laser passes through the small bone-like crystals (calcifications) found in breast tissues are measured and these indicate if a benign or cancerous tissue is present.

Professor Pavel Matousek, inventor of the technique, said: "It is very gratifying to see this technology, originally developed on our large facilities in the Central Laser Facility being applied in so many different ways that will have such an impact on society. As well as developing it for future breast cancer diagnosis and for detecting counterfeit drugs we expect, in the future, to see the technology at airports scanning liquid explosives. This support from EPSRC enables us to keep driving this technique forward, for the timeliest benefit to both individuals and the health service”.

With the technique needing a lot of refinement it would be a decade before this test could be routinely used in hospitals.

The grant has been awarded as part of a £12.2 million investment by EPSRC in 15 creative engineering research projects to deliver major advances in healthcare.

The projects funded will develop innovative technology which aims to improve the diagnosis and treatment of serious illnesses including cancer, improve patient outcomes, and help severely disabled people.