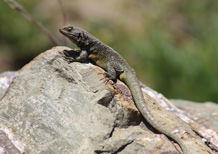 Dozens of species of lizards could become extinct within the next 50 years.

Climate change could lead to dozens of species of lizards becoming extinct within the next 50 years, according to new research.

Globally it has been observed that lizards with viviparous reproduction (retention of embryos within the mother’s body) are being threatened by changing weather patterns.

A new study suggests that the evolution of this mode of reproduction, which is thought to be a key successful adaptation, could, in fact, be the species’ downfall under global warming.

Researchers from the University of Exeter and the University of Lincoln investigated the hypotheses that historical invasions of cold climates by Liolaemus lizards – one of the most diverse groups of vertebrates on earth – have only been possible due to their evolution to viviparity (live birth) from oviparity (laying eggs). Remarkably, however, once these species evolve viviparity, the process is mostly irreversible and they remain restricted to such cold climates.

By analysing this evolutionary transition in the lizards’ reproductive modes and projecting the future impact of climate change, the scientists discovered that increasing temperatures in the species’ historically cold habitats would result in their areas of distribution being significantly reduced. As a consequence, if global warming continues at the same rate, viviparous lizards are facing extinction in the next few decades.

Dr Dave Hodgson, from Biosciences at the University of Exeter, said: “Climate change must not be underestimated as a threat to modern patterns of biodiversity. Our work shows that lizard species which birth live young instead of laying eggs are restricted to cold climates in South America: high in the Andes or towards the South Pole. As the climate warms, we predict that these special lizard species will be forced to move upwards and towards the pole, with an increased risk of extinction.”

Lead author Dr Daniel Pincheira-Donoso from the University of Lincoln’s School of Life Sciences is one of the few people in the world who works on the ecology and evolution of these lizard species. He said: “Lizards’ reproduction is largely linked to climatic temperatures and viviparous species are usually found in cold environments. When reptiles initially moved to colder areas they needed to evolve emergency measures to succeed in these harsh places, and we believe viviparity is one of these key measures. However, this transition is mostly one-directional and unlikely to be reversed. Rapid changes in the environment’s temperature would demand rapid re-adaptations to secure the species’ survival. Through the research we found that over the next 50 years nearly half of the area where these species occur may disappear, causing multiple extinctions due to climate change.”

Overall the conclusion is that although viviparity allowed lizards in the past to invade and adapt to live in cold environments, and was therefore a key trait for evolutionary success, it will now ultimately lead to multiple events of extinction.

Dr Pincheira-Donoso said: “These lizards are one of the most diverse groups of animals, and are able to adapt to remarkably diverse conditions. Unfortunately, a reduction in cold environments will reduce their areas of existence, which means that their successful evolutionary history may turn into a double-edged sword of adaptation. Their extinctions would be an atrocious loss to biodiversity.”

The paper ‘The evolution of viviparity opens opportunities for a lizard radiation but drives it into a climatic cul-de-sac’ is published in the peer-reviewed journal Global Ecology and Biogeography and was funded by the Leverhulme Trust.