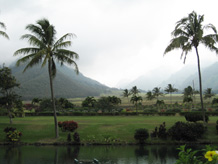 South Pacific countries will experience more extreme floods and droughts, in response to increasing greenhouse gas emissions, according to a paper in the journal Nature.

The changes will result from the South Pacific rain band responding to greenhouse warming.

The South Pacific rain band is largest and most persistent of the Southern Hemisphere spanning the Pacific from south of the Equator, south-eastward to French Polynesia.

The international study, led by CSIRO oceanographer, Dr Wenju Cai, focuses on how the frequency of such movement may change in the future. The study finds the frequency will almost double in the next 100 years, with a corresponding intensification of the rain band.

During moderate El Niño events with warming in the equatorial eastern Pacific, the rain band moves north-eastward by 300 kilometres. Countries located within the bands’ normal position such as Vanuatu, Samoa, and the southern Cook Islands experience forest fires and droughts as well as increased frequency of tropical cyclones, whereas countries to which the rain band moves experience extreme floods.

“During extreme El Niño events, such as 1982/83 and 1997/98, the band moved northward by up to 1000 kilometres. The shift brings more severe extremes, including cyclones to regions such as French Polynesia that are not accustomed to such events.” said Dr Cai, a scientist at the Wealth from Oceans Flagship.

Professor Mat Collins, from Exeter Climate Systems at the University of Exeter, who co-authored the study added: “We find an increased frequency of these extreme northward shifts of the rain band due to global warming. This is yet another unexpected consequence of our interference with the global climate.”

A central issue for community adaptation in Australia and across the Pacific is in understanding how the warming atmosphere and oceans will influence the intensity and frequency of extreme events. The impact associated with the observed extreme excursions includes massive droughts, severe food shortage, and coral reef mortality through thermally-induced coral bleaching across the South Pacific.

“Understanding changes in the frequency of these events as the climate changes proceed is therefore of broad scientific and socio-economic interest."

The research team turned to the extensive archives of general circulation models submitted for the fourth and fifth IPCC Assessments and found that increases in greenhouse gases are projected to enhance equatorial Pacific warming. In turn, and in spite of disagreement about the future of El Niño events, this warming leads to the increased frequency of extreme excursions of the rain band.

The paper was co-authored by Australian scientists Dr Simon Borlace, Mr Tim Cowan from CSIRO and Drs Scott Power and Jo Brown, two Bureau of Meteorology scientists at the Centre for Australian Weather and Climate research, who were joined by French, US, UK (Professor Mat Collins), and Cook Island scientists.